It has come to my attention that some of you are less fascinated than I am by discussions of my blog traffic. If that describes you, I suggest scrolling down past this post.

I wrote previously about a “Sullivalanche” caused by a link to one of my posts from Andrew Sullivan’s blog, back in October. Earlier this month I finally received my first “Instalanche,” the original slang term for an avalanche of visitors from a link by Glenn Reynolds, the Instapundit. The snapshot above from my Google Analytics data (click to enlarge) shows how dramatically such links change my normal traffic pattern.

Sullivan’s link, which was posted early in the morning, caused the largest single-day traffic on my site, 4,514 visits, some of which came from other sites that posted their own links after seeing me on Sullivan’s blog. But the Instapundit link actually drove more total traffic — Reynolds posted his link in the evening, which gave me a couple of thousand visits in the few hours before midnight, then more than 3,000 the following day. In the table below (again, click to enlarge), the Pajamas Media visitors overwhelmingly are from Instapundit, 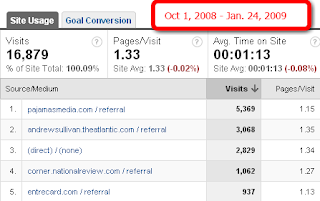 although a handful may be from comments I left for other Pajamas Media bloggers.

After Reynolds and Sullivan, the next largest group of my visitors came to the site directly — 2,829 visits from people who have my site bookmarked, including me, my wife, my mother, and probably a few other folks. Then there were about 1,000 visits from The Corner, where my BFF Iain Murray linked to me two times.

Rounding out the top five traffic sources is Entrecard, which sent more than 900 visitors during the period in question. Entrecard is a service that enables bloggers to feature 125 x 125 pixel ads on each other’s sites (see today’s ad on my site in the right column).

I joined Entrecard at the suggestion of my friend Lori Widmer at Words on the Page — and I immediately started finding fault with it. Members are awarded one EC (Entrecard Credit) for each site on which they “drop” (click on the Entrecard widget), up to 300 EC per day. The ECs are used to purchase ads on other sites in the Entrecard universe.

This means members have an incentive to whip through up to 300 sites as quickly as possible, finding and clicking on the widget and then moving on. Not exactly a quality visit — the traffic source table above shows that Entrecard visitors viewed the fewest pages per visit of any of the top traffic sources. (Interestingly, Instapundit visitors were not much higher.)

Skeptical though I was, I decided to give Entrecard an honest chance to prove its worth, and I’m glad I did. Once I installed the Entrecard toolbar for my Firefox browser, I had an easy way to open 10 sites at a time in separate tabs, so I could jump from tab to tab doing my drops in quick succession. It sounds mindless — and yet, from time to time something would catch my eye, and I might explore a little further. As I continued dropping day after day, I found I was having fun doing it, and eventually certain sites on my EC favorites list or inbox started to look comfortably familiar. 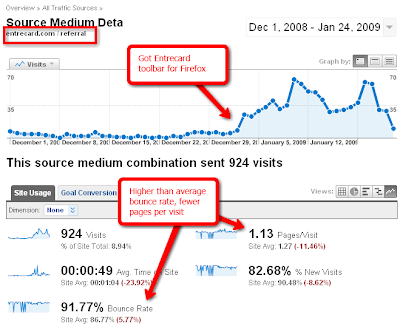 After I got serious about “dropping” on a daily basis, my traffic from Entrecard started to rise (see graph above), because many member make a point of reciprocal visits. On my own site, I started noticing that some of my new commenters were Entrecard members — people who found me in the course of doing their own daily drops. In other words, while the vast majority of Entrecard visitors were just dropping and running, a small percentage started coming back day after day. I think in the long run Entrecard will do more to build readership on my site than any Instalanche.

One other traffic insight, and then I’ll shut up. (Hey, you could have scrolled down.) If you click on the Visitors widget with all the little flags in the right column, you’ll find a breakdown of my traffic by country of origin. Nearly 90% of my traffic is from the U.S., and the next two biggest contributors are Canada and Great Britain, about what I’d expect. But I was surprised to notice that the Philippines is in 4th place, and other top-ten countries include Malaysia, Indonesia and Singapore. It turns out Entrecard has a very active following in the Philippines and the Pacific Rim.

11 thoughts on “C’mon, You Know You Want to Hear About My Stats”