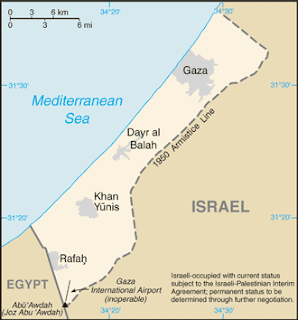 A law professor considers the notion of proportionality in Forbes:

The claim is that it is not permissible for the Israelis to kill many individuals, including civilians, to stop sporadic deaths from rocket fire. Sorry. As with individual aggression, proportionality has no place in dealing with deadly force, where the right rule is that all necessary force is permissible.

The Israelis are not required to slowly bleed in Sderot because Hamas is at present only capable of using primitive rockets against it. It need not wait until the attacks become ever more deadly to raise the ante.

[T]he only acceptable outcome of this war, both for Israel and for the civilized world, is … the disintegration of Hamas rule. It is already underway.

This is not about killing every last Hamas gunman. Not possible, not necessary. Regimes rule not by physically overpowering every person in their domain but by getting the majority to accept their authority. That is what sustains Hamas, and that is what is now under massive assault.

Hamas’s leadership is not only seriously degraded but openly humiliated. The great warriors urging others to martyrdom are cowering underground, almost entirely incommunicado. Demonstrably unable to protect their own people, they beg for outside help, receiving in return nothing but words from their Arab and Iranian brothers.

In the same paper on the same day, Jackson Diehl looks at the same situation and reaches the opposite conclusion:

Every day this war continues, Hamas grows politically stronger, as do its allies in other countries and its sponsor, Iran. Though Israel must defend its citizens against rockets and suicide bombings, the only means of defeating Hamas are political. Palestinians, who have no history of attraction to religious fundamentalism, have to be persuaded to choose more moderate leaders, such as the secular Fatah. In the meantime, Hamas’s existence must be tolerated, and it should be encouraged to channel its ambitions into politics rather than military activity.

So Mr. Diehl, let me get this straight. Israel must defend its citizens from violent attacks… but not through military means. It must tolerate the existence of Hamas… even though Hamas has no intention of tolerating the existence of Israel. Hamas “should be encouraged to channel its ambitions into politics rather than military activity”… even though its ambition is to drive Israel into the sea.

I sure hope Krauthammer is right, because I don’t hold out much hope for Diehl’s approach.

4 thoughts on “Israel vs. Hamas: How Much Violence is Enough”

Leave a Reply to The Market Artist Cancel reply