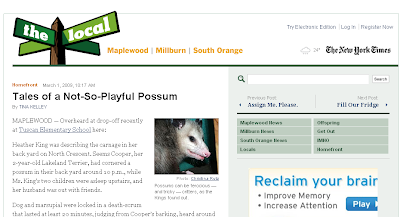 (Don’t miss my followup post about the true 800-pound gorilla of the story. Also, I tweaked this post’s headline and added a substantive Update at the end.)

Suddenly the Maplewood hyperlocal web neighborhood is crowded. The mighty NY Times today launched two local websites, each staffed with a full-time, veteran Times reporter. One site is in Brooklyn, the other covers Maplewood, South Orange and Millburn. 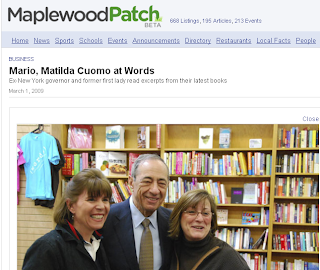 Venture capital-backed Patch.com also focuses on its recently launched Maplewood, South Orange and Millburn sites for now, but clearly has bigger ambitions. The company’s About page lists 20 staffers and says “Patch is run by professional editors, writers, photographers and videographers who live in or near the communities we serve, and is supported by a great team in our New York City headquarters.” The site is largely focused on the snowstorm today, and recently covered an appearance at a local bookstore by former New York Gov. Mario Cuomo.

The well-capitalized newcomers are contending with the original local Maplewood site, Maplewood Online, started by Jamie Ross way back in 1997. Over the years Jamie has branched out and created sister sites for South Orange, Millburn, West Orange, Montclair, Summit and Morristown. 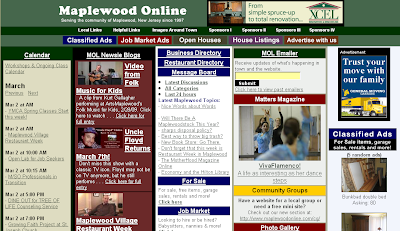 Maplewood Online for years was a one-person show. Jamie told me today that his brother moderates the message boards shared by all of his sites, and he has a friend working for him as well. He did much of the coding for the sites himself, and graphically, the sites have a distinctly 1990s web aesthetic. Jamie also is a standup comedian and local concert organizer, but says MOL and its sister sites are his primary source of income. He’s a 1992 Rutgers graduate, with a technical background, rather than journalism.

The Times’s local site is part of the newspaper giant’s effort to find new revenue streams to bolster its cratering primary business. In the past five years the company’s stock price has plunged from the upper $40s to about $4 per share today, and throughout the country long-time daily newspapers are going out of business or declaring bankruptcy.

Schachter said the sites will be accessible through an address linked to the Times’ home page, such as www.nytimes.com/fortgreene. They may expand to other communities if successful.

“The mission is to educate the community about how to be citizen journalists and contributors,” he added. “There are ‘place’ blogs everywhere. We have to create a real quality community that figures out the answers to questions on the minds of people in each place.”

But he admits the money-making options are unknown. “There is no conceivable way that a site staffed with a full-time New York Times journalist can pencil out as profitable,” he said. “We are trying to figure out using our people as experimenters if there is a model that combines journalism, technology and advertising that would work.” 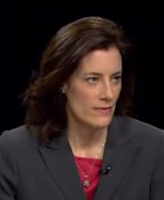 The Times’s local New Jersey sites are staffed by Tina Kelley, an acquaintance who lives a few blocks from me in Maplewood. Tina, who can sometimes be spotted around town knitting at local events (how’s that for a hyperlocal bloggish touch?), has been on the Times staff for nearly a decade — the nearby picture is from the Charlie Rose show last year, when she was interviewed about a story she wrote on mysterious bat deaths. (I grabbed that photo before her site launched, where I could get her “official” headshot. But then I’d lose my chance to show up in Google searches for “mysterious bat deaths.”)

For those wondering why we chose Maplewood, Millburn and South Orange, when there are so many new Web sites and publications on paper here already, itâ€™s very simple, actually: The Times wanted me to launch this experiment in New Jersey, and I live in Maplewood. And I knew the conversation here would be rich, fun and meaningful, because intriguing people live here, and for good reasons.

Jamie Ross’s theory was that the Times and Patch.com both started in the Maplewood region because there already is a booming online community in the area — Jamie has 8,000 registered participants on his message boards, and the flagship site has a frontpage script that currently reads, “There have been 6,927,419 visits to this page since August 20th, 2001.” But Tina said no, it really was just as simple as the fact that this is where she lives.

Tina’s NYT site already has taught me something — there is yet a fourth Maplewood site, called the Maplewoodian. If I were still a real journalist I would work them into the story and try to reach the editor, but I’ve spent far too much time on this already, and I don’t have a night-desk editor to snarl at me for not making a phone call. So all you get is a screenshot: 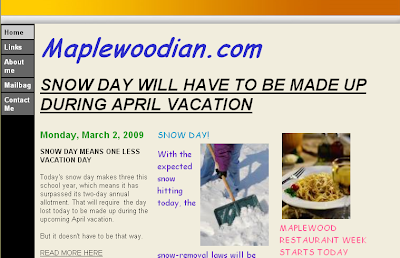 For a website focusing on the hyperlocal market, it seems remarkably hard to connect with anyone from Patch.com. There is no phone number or email address on the website itself, and I’ve sent out a dozen feelers to local editors and New York staff via Twitter and LinkedIn, as well as using the site’s feedback page. The only NYC phone number listed for Patch Media Corporation turns out to be a lawyer’s voicemail. One of the local staffers eventually contacted me on Twitter and said she would try to find someone to talk with me, but that was the last I heard. Maybe they can weigh in in the comments.

Jamie was in town first, so I’ll let him have the last word. I asked him what he thinks about all the competition, and he said: “I think MOL will survive, but it’s tricky to go up against a company that has billions of dollars.”

Clearly there’s a market for local information on the web — it’s just not clear how to make any money generating it. It’s also not clear to me whether it’s worth my while delving into the local market myself from time to time, as I have today, or if I should just stick to my primary interest in national politics. So this is an experiment — I’d love to get feedback in the comments.

Update: Hey, since when did the venerable News-Record of Maplewood and South Orange start being available online? And why wasn’t I notified?

More seriously, why doesn’t Worrall Community Newspapers Inc. (parent company of the N-R and its sister publications) promote the website on the front page of the print News-Record? All there is now is a nondescript URL — www.localsource.com — sandwiched between the date and the price. Last time I looked at localsource.com it was a mess, and you couldn’t find Maplewood stuff on it. Now, Maplewood.LocalSource.Com seems to have most of the N-R content, and a fair amount of advertising.

So I’ve corrected my headline — there are FIVE hyperlocal sites in the Maplewood BlogolopolisTM.