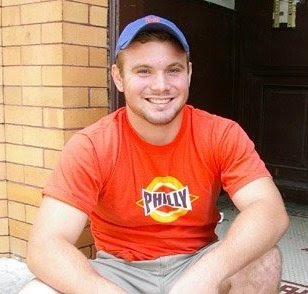 The other day I sat in a restaurant and watched my son become a man.

Harry recently bailed out of college. He was in the third year of a five-year construction management program at Drexel University in Philadelphia, and he hated the place. He had been working at the Philadelphia Housing Authority through Drexel’s co-op program, and he hated that. His grades were good and he fulfilled his modest duties at PHA, but he was bored and sick of it.

Classes had started up again, and he was working part-time while going to school full-time. And he pulled the plug.

Plan A was to enlist in the Marines. This idea was not well received by many in his family and social circle. Consternation ensued. Harry went to live with an uncle and his family in Maryland for several weeks.

Much as he enjoyed getting to know his toddling cousin girls, there wasn’t much for him in Maryland besides a temporary refuge. The weekend before Christmas he came to stay with the Web Goddess and me in Maplewood while he figured out what would be next.

Job prospects were not bright — turns out there’s a recession. He looked for work after the holidays, but found nothing. All the while he kept talking about the service — now he was looking at the Navy Construction Batallions. The Seabees. Plan B.

I live in a deep blue town in a deep blue state. There’s not a great deal of enthusiasm for military service in this corner of New Jersey. When the Web Goddess or I would say Harry is thinking of joining the Navy, well-meaning friends would say things like, “I hope you’re trying to change his mind.”

Over the past several months, in part through this blog, my conservative leanings have been coming out of the closet. In the run-up to the election, I grew used to being the only McCain supporter in virtually every conversation. Nobody has shunned me, at least not that I’ve noticed, but they don’t seem to know how to respond when I say things like, “I continue to support the decision to overthrow Saddam Hussein.”

The Web Goddess and I canceled each other out on Election Day, but she’s more financially conservative than I am. She’s pulled the levers for more Republicans than I have, although not recently. As is so often is the case, she knew exactly the right thing to say in talking with our friends.

I’m talking here about good Christian people whom I cherish and respect, and I have no interest in the kind of Internet flamewar that includes “words” like dhimmicrat and rethuglican. Here’s the conversation I’m prepared to have with liberal friends: “Do you think the United States needs to HAVE a military? Yes? OK… who should serve?”

I run a consulting business from home, and my business is every bit as robust as the rest of the economy. Harry and I have had plenty of time to bond while seeking work. When he wanted to borrow the car in January for the first of many trips to the recruiting office, he went with my blessing.

Turns out some of that book larnin’ sunk in — he aced the Ass-Vab (Armed Services Vocational Aptitude Battery) test, and was eligible for any enlisted field in the Navy. He said that when he told the recruiter he was still interested in the Seabees, the recruiter said no — “you’re going nuclear.” Plan C.

Harry signed up for a six-year stint — basically two years of Nuclear Field training on top of a normal four-year enlistment. He’ll get a $21,000 “signing” bonus if he successfully completes nuclear school, and will end up serving either on a nuclear submarine or an aircraft carrier.

He’s a disciplined athlete and body builder — where the hell that comes from I’ll never know — and he’s not deterred by tales of my own long-ago Coast Guard basic training. He’s been working out more to get in better shape — his only frustration has been that because of the timing of his training class, he was not scheduled to report until October.

That changed earlier this week — he got the message that a slot had opened up — could he report on March 10? He told me this with great excitement when I got home from running an errand. He said the downside is that his 21st birthday is March 15, and he’d have to postpone his first legal purchase of a drink.

I sensed a parenting opportunity. “Suck it up, son.”

“Oh yeah, I already said yes.” He took a shower, and I heard him singing Anchors Aweigh.

We went to a restaurant and talked while we ate. He kept getting calls on his cell phone — it turns out that despite what he’d earlier been told, he needs a copy of his transcript when he reports on Tuesday, so he drove to Philadelphia today to get it. He spent the night at his mother’s house the night before and picked up his birth certificate there. In between still-kind-of-a-teenager enthusiasm — “If I get to kill a pirate, my grandchildren will never hear the end of it” — I watched as a mantle of determination and gravitas settled over him.

I don’t want my son in harm’s way any more than any other parent, and I’m glad he’s not going to be in the infantry. As near as I can tell, the Afghan Navy is not terribly formidable, but America’s enemies are resourceful, and have proven they can strike at sea.

Harry knows that, but feels good about his decision to join the Navy. He’ll end up with a college degree and money to pay off his Drexel student loans, and officer candidate school will be an option. If he decides to put in 20 years in the Navy, he can have a pension at the age of 41. In the meantime, he’s got guaranteed stable employment for the next six years, at a modest salary on top of room, board and free medical care.

He also has one other powerful motivation. It’s not the motivation he talks about the most, but it’s the one that came first.

My son is a patriot. He wants to serve his country.

(Photo by the Web Goddess. This post was written earlier this week, and published March 7 with minor changes. In the time-honored military tradition of “hurry up and wait,” Harry’s reporting date has been postponed. The current expectation is that he will report for duty on March 23.)