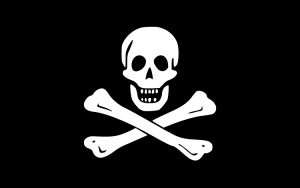 Best possible ending: Three dead pirates, no good guys hurt, one hero captain survives after winning his crew’s freedom by offering himself as a hostage.  On Easter Sunday, no less.  (I wish I had thought of Easter SEALs!)

But there are still more than 200 hostages on other ships being held by Somali pirates, and the problem is not going to go away by itself.  “The pirates have a great business model that works for them: Seize ships, get ransom, make millions,” said Adm. Rick Gurnon, head of the Massachusetts Maritime Academy, where Captain Richard Phillips had trained.

Ultimately, the pirates will have to be defeated on shore.  It’s been done before — the Marine Corps and the United States Navy both fought pirates as one of their first missions, on (and off) a different coast of Africa.

Despite my son’s desire to have stories to tell his grandchildren, he probably won’t personally get a chance to fight pirates.  His enlistment got delayed again, but he now has written orders to report on April 28 to start basic training.  He’ll be in the Navy’s nuclear power school for a couple of years before serving on a nuclear submarine or aircraft carrier.