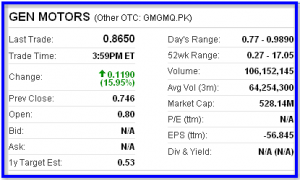 As you may have heard, General Motors, once the world’s largest company by market capitalization,Â  is bankrupt. You and I, along with 300 million of our closest friends, are going to end up owning about 70% of a much-smaller General Motors.Â  Congratulations.

In this morning’s Washington Post, George Will has a good column worrying about all the different ways the government bailout could go badly, now that GM will be benefiting from the same ownership that has made Amtrak such a paragon of efficiency for nearly four decades.Â  The most obvious problem is that GM needs to close hundreds of dealerships — every one of which is in somebody’s Congressional district.

At the end of the column he mocks the idea that General Motors is “too big to fail”:

Big? GM’s market capitalization, $375.8 million on Wednesday, is about the size of California Pizza Kitchen’s ($340 million) — is it too big to fail? — and one-eleventh that of Harley-Davidson ($4.3 billion). Fail? If GM has not already failed, New Coke was a success.

California Pizza Kitchen is a nice parallel — they make mango tandoori chicken pizzas, GM makes the Chevy Cobalt.Â  But I was more interested in the fact he was quoting Wednesday’s market cap in Sunday’s paper.

I went looking for fresher stock prices, and found that GM had been delisted by the New York Stock Exchange, but was still trading over the counter, in the so-called “pink sheets.”Â  And looky there, the stock price was up almost 16% on Friday alone! More than 100 million shares traded hands Friday, with the day’s last trade at 86.5 cents, driving the market cap up to $528 million.

Now, investing can be a risky business, but some things are risk-free.Â  Here’s one: there is no risk that GM stock will not go to zero.Â  And yet on Friday, people collectively spent tens of millions of dollars purchasing GM stock at a price above zero.Â  This kind of trading happens in most major bankruptcies, and I’ve never understood it.Â  If you still have the 100 shares of GM that your grandparents gave you as a kid, I could see wanting to get whatever you can at this point.Â  But why the heck would anyone take the other side of that trade?Â  The rules of bankruptcy are well defined, and stockholders get nothing unless bondholders, creditors, employees and everyone else with a stake has been paid first.

Except… about those “well-defined” bankruptcy rules…