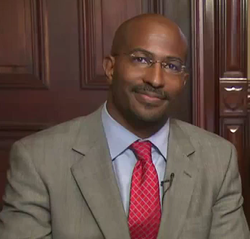 “Green Jobs Czar” and 9/11 “Truther” Van Jones resigned this morning, shortly after midnight on the Sunday of Labor Day weekend. Echos of Chas Freeman: Once again an Obama appointee has been forced out amid controversy — before much of the mainstream media got around to covering the controversy.

As Jennifer Rubin of Commentary‘s Contentions blog wrote before the resignation was announced shortly after midnight this morning, â€œItâ€™s hard to believe this isnâ€™t a fictional character dreamed up byÂ Obamaâ€™s conservative critics.”Â  The latest revelation was that he participated in an anti-American recording narrated by convicted cop-killer and far-left poster child Mumia Abu-Jamal.

Even now, the online New York Times feels the story is worth only a bland headline in tiny type near the bottom of the homepage: “White House Adviser on â€˜Green Jobsâ€™ Resigns.”Â  The Washington Post, to its (comparative) credit, has a prominent link near the top of the homepage: “Embattled Obama Aide Resigns.”

Can you imagine the wall-to-wall coverage that would have ensued if a Bush appointee were discovered to have views that far out on the opposite fringe?