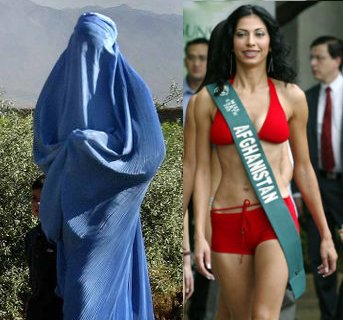 Which outfit do you find offensive?

I don’t know what to think about the French Parliament’s vote last week to ban the wearing of the burqa and niqab.Â  More precisely:

The legislation adopted Tuesday by the Senate, the upper house of the French Parliament, forbids people from concealing their faces in public. It makes no reference to Islam, and includes exceptions for people who need to cover up for work reasons, such as riot police and surgeons.

Despite the “inclusive” language, nobody disputes the obvious fact that the target of the law is the practice among a small minority of French Muslim women of wearing garments that conceal them from head to toe.

I come to this topic via an online debate published today on The Wall Street Journal‘s website.Â  In an exchange of emails, Journal Editorial Board members Matthew Kaminsky and Bret Stephens stake out opposing positions on whether the French ban is appropriate.Â  Stephens offers 10 numbered points in support.Â  They start to become persuasive in the second half:

7) Also violated by the burqa/niqab is the fundamental liberal concept of equality. Only female identity is erased here; only the female half of the population effectively disappears from public view. To suggest that women can be separate but equal…. well, I don’t need to spell the rest out.

8 ) Who are we kidding? You can suppose that some of the women wearing the burqa/niqab genuinely want to do so. But you can be sure many of them do so only out of fear of abusive, sometimes murderous, husbands/brothers/fathers. The incidence of honor killings or of husbands mutilating their wives is on the rise throughout Europe, in part because Europe allows Muslim immigrants to get away with enforcing medieval social norms in their urban ghettos. This ought to be discouraged.

But the real issue here is one of principle. A stateâ€”a majority Christian state, to bootâ€”is mandating how members of a minority religion should go about practicing theirs. I am troubled by the headscarf ban, but at least that applied only in public schools. Here the police will have the right to pull a piece of clothing off you in the middle of the street. Islam is the target: they’re not saying the Krishnas should stop wearing those “revealing” outfits or Orthodox Jewish women can’t wear wigs that, to some eyes, conceal their identity. What next, laws on mandating skirts be this long or this short?

Can't tell the oppressive headgear without a program

You’ll say it’s different. That the full Islamofemme getup is a tool of oppression. Sure, maybe on cultural grounds, as seen by your eyes. But to some of them it is about free speech and their religion and their right to honor their culture, however distasteful to our eyes. Who are you to say what it is and isn’t?

Still I am no less a feminist than Bret is. By all means, let’s do all we can to liberate Muslim women. In Europe’s Muslim communities that comes down to schooling, jobs and law enforcement. Leave the fashion police to Saudi Arabia. We get into serious trouble if we say, “oh the headscarf is ok, but the burqa ain’t”. Imagine if such a proposal even came up in the US (inshallah, it won’t): it would — for now — be laughed off the public square.

Yes, on this topic at least, America is more progressive than France.

The discussion brings to mind the controversy over the Ground Zero mosque.Â  It’s not immediately clear whether the similarities or the differences are more compelling.

Similarities: Both controversies involve religious freedom — although a case can be made that burqas are a cultural invention, not a religious one, as the burqa apparently has no basis in the Qu’ran.Â  Both involve some degree of mistrust and anxiety about Muslims.Â  Both involve lopsided majorities — 70% opposition to the Ground Zero mosque in America, a vote of 246-1 in favor of the burqa ban in the French Parliament.

But there’s one huge difference.Â  In France, the state itself is imposing the burqa ban.Â  In America, the Ground Zero mosque is opposed not by the government, but by citizens exercising their freedom of speech.

As has happened in the past, the process of researching and writing a blog post is helping me decide what I think.

Neither issue is a slam dunk. Both arguments require careful parsing.Â  In Lower Manhattan, I oppose the building of a $100 million Islamic trophy on the site of a building damaged by falling debris on 9/11.Â  But I applaud the fact that Muslims are welcome to gather in prayer in a Pentagon chapel less than 100 feet from where that plane crashed.Â  There’s some tension between these positions, but I’m comfortable with both.

I sympathize with the French opposition to the burqa.Â  As a lifelong proponent of equal rights and opportunities for women, I find the very concept of the burqa repugnant, and I will never believe that women wear it as a matter of “choice” in any meaningful sense of the term.

But I think France goes a step too far in imposing a governmental ban.Â  That 246-1 vote reflects the fact that most of the opposition Socialists abstained in the vote.Â  The Journal reports: “Many Socialist Party lawmakers have said that they oppose the full-body veils, but that they would prefer to do so through dialogue and other means, not through legislation.”

I never thought I would say this, but here goes:Â  I’m with the French Socialists on this one.