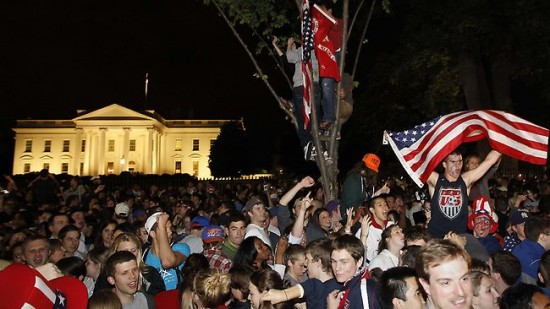 The Rev. Bernard Poppe, my priest and friend, is more liberal than I am.Â  (Ditto for 98% of his flock at St. George’s Episcopal, in the deep blue town of Maplewood, NJ.)Â  So when Bernie started his sermon on Sunday by indicating he had mixed feelings about the death of Osama bin Laden, I was prepared to sit politely in silent disagreement.

He said he was pleased at the news bin Laden had been killed — but then appalled by the tenor of the celebration in front of the White House and elsewhere.Â  He questioned his own motives: “I’m not supposed to rejoiceÂ  at anybody’s death.” He was unpersuaded by the notion that bin Laden had been “brought to justice,” because justice implies due process and an opportunity to mount a defense.Â  The celebrations made it seem more like vengeance than justice.Â  I hope I am accurately reflecting what he said — Father Poppe sometimes posts his sermons online, but this one was delivered without notes. 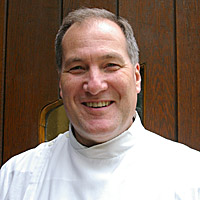 I also reject the “brought to justice” formulation, although my reasons probably differ from Bernie’s.Â  The idea that the fight against Islamic jihadism is a war, not a law-enforcement issue, is a well-established conservative meme — I’ve written about it here, here and especially here.Â  Bin Laden declared war on America in 1996, but our government did not acknowledge that we were at war until that awful day in 2001.Â  Much of the Left still has not acknowledged it, although President Obama, to his immense credit, has.

My faith teaches me that Osama bin Laden was a child of God and a sinner — and that he shared those traits with me.Â  Few people in recent history have more fully earned a double-tap to the forehead, and yet hatred and the lust for vengeance are ugly emotions that lead to bad places.Â  It’s appropriate for a minister to remind us of these things.

But if we are not to celebrate death, and if we reject the law-enforcement model, I still believe there is reason to rejoice in the success of the Navy SEALs.Â  We cheer not for vengeance or justice, but for victory.Â  We did not start this war, and it is not over, but our side has won an enormously important battle.Â  I think we can celebrate in good conscience.