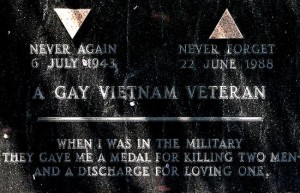 While I was at the Karen Armstrong lecture last night, President Barack “Marriage is between a man and a woman” Obama was walking back his position on one of the few issues where I have found myself politically to his left: Same-sex marriage.

He didn’t use the word “marriage,” but last night at a New York fundraiser said “I believe that gay couples deserve the same legal rights as every couple in this country.”Â  New York is debating a bill that would provide marriage equality for same-sex couples.

I’m glad he’s changed his mind, but it’s fascinating that marriage equality once again becomes a vehicle for pandering to the base.Â  Obama’s predecessor, who was certainly no homophobe, in 2004 calculated that he had more to gain among evangelicals than he had to lose among the few gay people inclined to support him, and endorsed the (anti-equality) Federal Marriage Amendment.