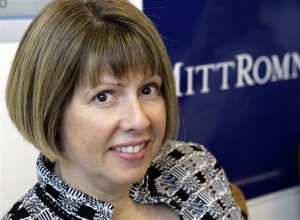 With the Republican nomination apparently sewn up, Mitt Romney now turns his attention to the most dangerous and dysfunctional ritual in all of American politics:Â  The choice of a running mate.Â  Today Romney named Beth Myers, a long-time senior advisor, to head his vice presidential search committee.

Romney will be the nominee because he is the last candidate standing after a grueling multi-year marathon of fundraising, organization-building and campaigning, leading up to a labyrinth of primaries and caucuses in which his qualifications were scrutinized in detail and weighed against those of other contenders.Â  He was essentially the runner-up for the nomination in 2008, which means he’s been running for president for more than half a decade.Â  If he wins, he may or may not become a good president, but at least he will have been thoroughly examined.

So how will the Republican VP nominee be selected?Â  Sometime in the next four months, Romney will make that decision unilaterally, after a secrecy-shrouded process of his own choosing.Â  Nobody else gets a vote.

Oh, the Republican Convention in late August could theoretically decline to nominate Romney’s pick, but that’s not going to happen.Â  Conventions are designed to be coronations, and if there’s no contest for the top of the ticket, there’ll be no contest for the bottom.

Forty-seven men have served as vice president of the United States, and 14 of them have gone on to become president — just under 30%. Disregard the five VPs who were elected in their own right, and you’ve got nine VPs who ascended because of the death or resignation of the president — about 19% of the total.

The primary duty of a vice president is to be ready — and qualified — to assume the presidency on a moment’s notice. Here are some of the people the two major parties have nominated, during my lifetime, for this somber and auspicious role:Â  Spiro Agnew, Sargeant Shriver, Geraldine Ferraro, Dan Quayle, John Edwards.Â  Four years ago, of course, John McCain tried to hit a five-run homer by choosing Sarah Palin, and succeeded only in creating a target-rich environment for Tina Fey.

I don’t have any bright ideas for a better system — I just know this one makes no sense.Â  And I hope I won’t end up reprising my 2008 election eve post: “Vote for McCain… and pray for his continued good health.”

2 thoughts on “Our Ridiculous System for Picking a Vice President”