There was no way for Republicans to win the battle over the misnamed fiscal cliff, and they did not.Â  Their sole accomplishment was to move the threshold of the “millionaires and billionaires” tax from quarter-millionaires to nearly half-millionaires.Â  The cliff deal actually increases spending, and pushes a decision about spending cuts back by two months.Â  It’s like the dramatic scene at the end of a blockbuster movie — it sets up the sequel.Â  (Or maybe sets up the sequester.) 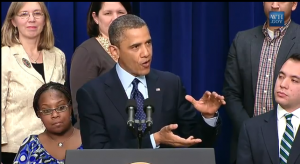 In his unseemly end zone dance late on New Year’s Eve, President Obama declared “I will not have another debate with this Congress” about the debt ceiling.

Actually, Mr. President, you will.

Obama’s last public statement of 2012 was very carefully worded, and is worth unpacking in some detail. In full campaign mode, with the faces of supporters serving as a backdrop, Obama claimed credit for the tax agreement that will squeeze a few hundred billion dollars out of the “wealthiest” (actually, “highest-income”) Americans.Â  He then said:

Now, one last point I want to make — while I will negotiate over many things, I will not have another debate with this Congress over whether or not they should pay the bills that theyâ€™ve already racked up through the laws that they passed.

Note that he never uses the term most familiar to the public: “debt ceiling.” More about that in a moment; for the time being, savor the artistry behind how he frames the conflict.

He won’t debate with Congress over whether “they should pay the bills that they’ve already racked up through the laws that they passed.”Â  Um, Mr. President? Somebody actually signed all those laws, and for the last four years it’s been you.Â  And Congress doesn’t pay the bills.Â  Your executive branch does.

Let me repeat:Â We can’t not pay bills that we’ve already incurred. If Congress refuses to give the United States government the ability to pay these bills on time, the consequences for the entire global economy would be catastrophic — far worse than the impact of a fiscal cliff.

Actually, you can “not pay bills” that have already been incurred — or rather, you can defer paying some of them.Â  Corporations and individuals do it all the time.Â  And yes, there will be consequences, some of them severe. In a June 2011 report released during the last debt ceiling crisis, the Bipartisan Policy Center helps demystify the debt ceiling by describing the difficult decisions that would have had to be made that August without a debt ceiling increase. One thing that will not happen the day after the debt ceiling is reached is a default on bond payments — there will be plenty of revenue to continuing paying ongoing debt obligations indefinitely.Â  Dramatic and disruptive cuts in government spending would occur elsewhere.

People will remember, back in 2011, the last time this course of action was threatened, our entire recovery was put at risk. Consumer confidence plunged.Â Business investment plunged. Growth dropped. We can’t go down that path again.

We’re already going down that path, Mr. President.Â  We’ve been on that path for decades.Â  Generations of politicians in both parties have made unkeepable promises.

At some point there is going to be a wrenching restructuring of government and the modern welfare state. The invaluable contribution of the Tea Party is to insist that we must begin that restructuring now, rather than leaving it as an even larger problem for our children and grandchildren.

The unique circumstances of the fiscal cliff left Republicans in the awkward position of arguably having to fight for a tax increase for everyone.Â  House Republicans, or at least enough of them, wisely backed down after letting the Senate do the dirty work of agreeing to a deal.

The optics are very different in the debt ceiling debate — starting with the names of the crises. “Fiscal cliff” sounds like a calamity, but “debt ceiling” can be championed as a prudent refusal to go further into debt.

Don’t be taken in by the inevitable claims that “to not raise the debt ceiling is akin to refusing to pay your credit card bill,” as Suze Orman stated in 2011.Â  Here’s my reaction at the time:

Nope.Â  Itâ€™s akin to making minimum monthly payments on the credit card, while applying for an increase in your credit limit.Â  Tea Party Republicans are saying, this is it â€” no more increases in credit limits, youâ€™re too far in debt already.

All of this may sound like an argument against raising the debt ceiling â€” but in fact, I hope the ceiling gets raised, the sooner the better.Â  Thatâ€™s because the stakes right now are higher than whether the arbitrary line in the sand gets drawn at $14.3 trillion or $16.7 trillion.Â  It would be very disruptive, in unpredictable ways, to bounce off an unmoving debt ceiling â€” and I fear the Republicans would get the blame for the disruption.

Letâ€™s give ObamaÂ  the $2.4 trillion debt ceiling increase to get him past the election â€” thatâ€™s at least less than the $3.1 trillion debt increase that already has happened on his watch.Â  The GOP should not let the perfect be the enemy of the good â€” theyâ€™ve already succeeded in changing the context from â€œnoâ€ spending cuts to â€œhow muchâ€ in spending cuts.Â  The single most important thing Republicans can do right now to improve the financial situation is to vote the most free-spending president in history out of office.

Well, the vote-him-out gambit didn’t work — but Obama’s re-election has also eliminated the most compelling political argument against holding the line on the debt ceiling. The House Republicans have control of the credit limit, and they should stand fast and refuse to increase it unless they can secure meaningful, unhypothetical spending cuts equal to a multiple of any increase.