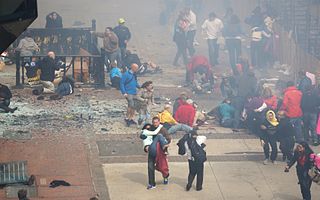 Much about the Boston Marathon bombing reeks of domestic terrorism — it happened on Income Tax Day, near the April 19 anniversary of Waco and Oklahoma City, and on the Patriot’s Day holiday weekend in Massachusetts.Â  Patriot’s Day is a symbolic two-fer — it commemorates the Battles of Lexington & Concord, which actually occurred on April 19, but the day is observed each year on the third Monday of April, which this year was April 15.Â  The location also evokes thoughts, fairly or otherwise, of the Boston Tea Party and the modern Taxed Enough Already party movement.

But wait!Â  The talking head on CNN just said that the use of pressure cookers in bomb-making is a signature of the Taliban!Â  A clue!Â  But it turns out the Taliban has published bomb-making instructions on the internet.Â  And the Google tells me that the al-Qaeda English-language Inspire magazine published a recipe on using pressure cookers to make bombs.Â  But another CNN talking head just said “a U.S. official” had said there was no evidence that this is al-Qaeda’s work (I can’t find a link).Â  OK, so maybe a hitherto unknown, independent Islamist terror group?

Questioner: “Why were loudspeakers telling people in the audience to be calm moments before the bomb went off?Â  Is this another false flag staged attack to take our civil liberties away while promoting Homeland Security, who are sticking their hands down our pants on the street?”

Props to the Guv for handling it just right.Â  I would have said “Just shut up,” which would only have provided more ammunition.Â  (The transcription above is mine, based on video from the news conference.)Â  Props also to the California man who promptly registered BostonMarathonConspiracy.com,Â  “to keep some conspiracy kook from owning it.”

The first-best advice I saw on speculation came from Andrew McCarthy, former federal terrorism prosecutor and now a pundit for National Review (among others).Â  About 90 minutes after the blast, he wrote:

First, it is a mistake to get too far out in front of the initial reports, which are almost always wrong in some details â€” sometimes, in some major details. …

The recent history of terrorist attacks is that investigators figure out who is responsible within a very short period of time, both because of the high priority such investigations are given and the tendency of terrorists to signal their responsibility for what theyâ€™ve done (after all, the point of terrorism is to leave us intimidated by the terrorists, so they obviously feel the need to brag). We will know who did this soon. It is counterproductive to do much speculation.

Counterproductive, yes.Â  But how can we help ourselves?

My reaction to the initial reports wasÂ blasÃ©.Â  I saw a headline something like “At Least 6 Hurt in Boston Marathon Explosion,” and I shrugged and went back to what I was doing.Â  But I got sucked in pretty quickly.

Because of the backstory behind this blog’s name, my ears always perk up at any reference to the word “evil.”Â  I believe evil exists and it’s important to call it that.Â  President Bush — he of the “Axis of Evil” and of “We are in a conflict between good and evil, and America will call evil by its name” — was very comfortable with the term.Â  Props to President Obama for not letting neocon cooties deter him.Â  After praising the reactions of first responders, both professional and amateur, Obama said â€œIf you want to know who we are, what America is, how we respond to evil, thatâ€™s it: selflessly, compassionately, unafraid.â€

OK, I could quibble with “unafraid,” I’d substitute “bravely,” a way one can act while being afraid.Â  But in the words of Jennifer Rubin, who is often a harsh Obama critic: “His job, before there are concrete answers, is to exude calm. He did that.”