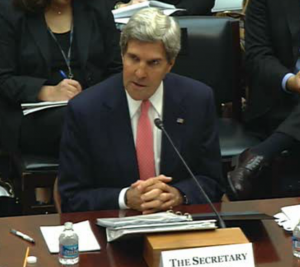 I’m still glad John Kerry didn’t become President, but I’m starting to like him as Secretary of State.

I’ve been riveted by the Congressional hearings on Syria this week.Â  (One of the few advantages of being underemployed — I work part-time again, evenings, at a supermarket — is that I’m often free during business hours.)Â  Again and again I’ve been impressed by the eloquence and clarity of the man who once said “I actually did vote for the $87 billion before I voted against it.”

Here’s my favorite passage, from testimony Sept. 4 at the House Foreign Affairs Committee (my emphasis throughout):

When Nobel Peace Prize laureate Barack Obama launched his third war, in Libya, I was astonished and skeptical.Â  It took quite a while to sort out how I felt about it — I started out lukewarmly opposed, then eventually became optimistic about a positive outcome (long before Benghazi).

Syria is different.Â  From the moment I heard of Obama’s plan to attack Assad’s regime over the use of chemical weapons, it felt like the right thing to do — to the extent that I was initially dismayed when he seemed to be punting to Congress.Â  But after writing my first post on the topic, I was surprised by the vehemence of the opposition by some Republican lawmakers, and by many in the public.Â  Maybe I needed to think more about this.

To road-test my initial impression, I read a lot of commentary and watched the hearings.Â  I’m more convinced than ever about the need to punish Assad.Â  I think, and hope, that Obama will strike under his authority as commander-in-chief even if Congress refuses to approve.

Why?Â  Well, Kerry (and his speechwriters) can say it better than I can.Â  I never thought I would say this, but on this topic, I’m with John Kerry.

From the Senate testimony on Sept. 3:

As confidently as we know what happened in Damascus, my friends, on August 21st, we know that Assad would read our stepping away or our silence as an invitation to use those weapons with impunity. And in creating impunity, we would be creating opportunity — the opportunity for other dictators and/or terrorists to pursue their own weapons of mass destruction, including nuclear weapons. …

So this is a vote for accountability. Norms and laws that keep the civilized world civil mean nothing if they’re not enforced. …

This is not the time for armchair isolationism. This is not the time to be spectators to slaughter. Neither our country nor our conscience could afford the cost of silence. We have spoken up against unspeakable horror many times in the past; now, we must stand up and act. And we must protect our security, protect our values and lead the world with conviction that is clear about our responsibility. â€¦

Are you going to be comfortable if Assad, as a result of the United States not doing anything, then gasses his people yet again and they — and the world says, why didn’t the United States act? History is full of opportunity, of moments where someone didn’t stand up and act when it made a difference.

And from the House testimony, my second-favorite passage:

No country has liberated as much land or fought as many battles as the United States of America and turned around and given it back to the people who live there and who can own it and run it. We are the indispensable nation. This is because of who we are and what we have achieved. And we should be proud of it. And we have a great tradition to try to live up to in terms of trying to help people to see a peaceful road, not a road of jihadism.

Early in his presidency, Barack Obama demonstrated that either he didn’t believe in American exceptionalism, or he just didn’t know (at that time) what the term meant. It’s great to hear a senior member of his administration assert America’s duty to lead in a clear voice.

(Screen grab from State Department video of Kerry testifying in the House.)