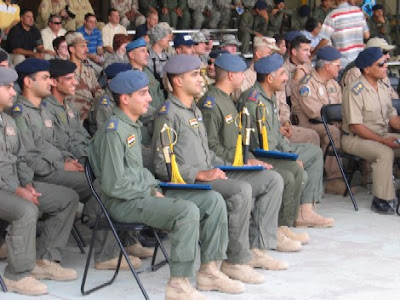 “Ask any of these three brand-new pilots if the Surge worked.” (Photo Credit: TheDonovan.com)

The financial crisis has sucked all of the oxygen out of the news media, but it’s good to remember that there’s a war going on — and going well.

From a “DV” (distinguished visitor, not otherwise identified) at the first graduation of new Iraqi Air Force pilots since the liberation of Iraq, via an unofficial translation on the fly:

â€œHe is saying that for the first time in our history, we are not doing things for one man, but we are doing it for all the people of Iraq. He is saying the US has showed us how, and we must not forget when we thank God every day, we must also ask him to bless the US.â€

My link above is to a Jonah Goldberg post in The Corner, but the original author of those words is “Bill” at TheDonovan.com, “the home of two of Jonah’s Military Guys.” Other milbloggers also were all over the story, but it went unreported in the mainstream media. As one of Bill’s co-bloggers said later, “how is this not important?”

a few months ago, putting their pictures in a public forum would have been a death sentence for them or their families. Right after the ceremony, they were each interviewed for Iraqi TV.

TheDonovan.com’s “Bill” is not further identified in the “About Us” section of the website, but he’s referred to on another milblog as “CWO [Chief Warrant Officer] Bill T.” TheDonovan.com indicates that all the posters are “retired warriors.” Bill’s post indicates he teaches a course at the flight training school in Kirkuk.

In other words, he’s a contractor… or, in the execrable formulation of Markos “Screw Them” Moulitsas, owner of Daily Kos, he’s a “mercenary” — a type of warrior declared not worthy of being mourned, when the charred bodies of four contractors were dragged through the streets of Falluja in 2004.

My anger is rising as I write this. It’s no longer sufficient to my mind to say that the situation is “improving” in Iraq. If it was in any way defensible in April 2007 for Senate Majority Leader Henry Reid to declare “this war is lost and the surge is not accomplishing anything, as indicated by the extreme violence in Iraq yesterday” — then simple logic and justice demands the conclusion today that “the war is being won.” Not “over” — “being won.” But you won’t read about it in the MSM. Good news is no news, and besides, it remind the voters about where the candidates stood on the surge.

Class 66 was the last class to graduate from the *old* Flight School. Seven years ago. In Tikrit. …

[As for Class 67, which graduated Oct. 13,] There are only three of them. They volunteered when it was a tossup whether theyâ€™d even live to graduate.

But there are eight in Class 68.

And twenty-four in Class 70.

Back at you, “DV”: May the Good Lord bless, preserve and keep Iraqi 2nd Lieutenants Hassan, Majid and Habeeb as they proudly wear their flying wings in defense of their country.

P.S.: I’m late to the party as a milblogger fan — a good place to start exploring is this list of the top 100 milbloggers.

A fascinating 20-minute video from MilBlogs TV describes how American forces cooperated with and supported the early stages of the Anbar Awakening, a key factor in the turnaround in Iraq.

It’s not a completely happy tale — the American captain and the local sheik who played central roles in the cooperative effort both were ultimately killed. But near the end of the video is a helpful explanation of the reasons for success:

“The tribes represent the people of Iraq, and the populace represents the “key terrain” of the conflict. The force that supports the population by taking the moral high ground has as sure an advantage in COIN [counter-insurgency] as a maneuver commander who occupies dominant terrain in a conventional battle.”

This is why I’ve never believed the advances made in Iraq are going to be temporary, and disappear with the end of the surge. The irony is that the success of the surge will probably benefit the candidate who opposed the tactic. The better things get in Iraq, the less concerned people become about the idea of Obama as Commander in Chief.