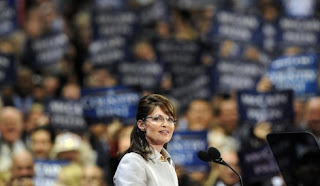 I take back everything I said or hinted or even thought about Sarah Palin being a drag on the ticket.

She did several things she had to do in her speech tonight:

She took lots of hard shots at Obama, but by my count only one cheap shot. I wish she had left out the snipe that Obama’s worry about Al Qaeda terrorists is “that someone won’t read them their rights.” I don’t think that’s fair even as an exaggeration of anything I’ve ever heard Obama say.

But I loved the line that “Victory in Iraq is finally in sight … he wants to forfeit.” The “wants to forfeit” part isn’t literally true either, of course — but it’s certainly true that Obama’s pre-surge proposal to retreat-no-matter-what would have forfeited any chance at a positive outcome in Iraq.

My Obama-supporting wife — whom I love with a love that transcends space and time, let alone politics — didn’t like the speech. We both reacted negatively to the cheap shot on Miranda rights. But Nina was clearly pained to hear a man she admires attacked again and again, first by Giuliani and then by Palin. We watched the speech through different filters. Because I want McCain to win, I felt good about the effective, substantive, sarcastic hard punches being thrown at Obama — a man whom, as I’ve written before, in many ways I admire also.

Nina and I have virtually identical views on social issues. We both think the Republicans are on the wrong side of the abortion issue. Even more strongly, we both think they’re on the wrong side of marriage equality for same-sex couples. She was as angered and appalled as I was by the attacks of 9/11, and she knows the danger isn’t over. But we’ve reached opposite conclusions about which candidate to support. We respect each other’s decision, and we respect each other. We have in-depth, substantive discussions on the issues, but we’re careful not to mock each other’s candidate when we talk. That’s the way it should be in a marriage

But that’s not the way it’s going to be on the campaign trail. Unfortunately, negative campaigning works. Because it works, both sides have to do it. I wish it were otherwise — but no candidate has ever won a major election by staying entirely on the high road.

And so to bed.

5 thoughts on “So THAT’S Why He Picked Her – What a Speaker!”