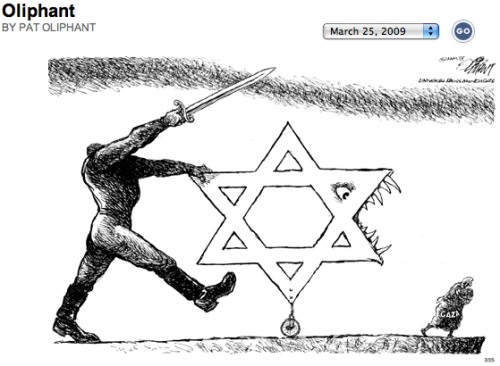 Is the cartoon truly anti-Semitic, or is it “merely” anti-Israel? I say both, but whatever. The point is that the cartoon is a dangerous lie. It’s dangerous not just to Israel, but to America, to the West, and to any society that faces asymmetric attacks from Islamic fascists.

Like McCarthy, I think this excerpt from Rubin’s commentary spells out the danger (emphasis added):

Oliphant like many or most Western intellectuals, academics, and policymakers, still doesnâ€™t understand the concept of asymmetric warfare. In this, a weaker side wages war on a stronger side using techniques it thinks can make it win. What are these techniques? Terrorism, indifference to the sacrifice of its people, indifference to material losses, refusal to compromise, extending the war for ever. This is precisely the technique of Hamas: letâ€™s continue attacking Israel in order to provoke it to hit us, letâ€™s target Israeli civilians, letâ€™s seek a total victory based on genocide, letâ€™s use our own civilians as human shields, and with such methods we will win. One way we will win is to demonize those who defend themselves, to put them in positions where they have a choice between surrender and looking bad. This cartoon is a victory for Hamas. But it is also a victory for all those who would fight the West and other democracies (India, for example) using these methods. Remember September 11?

In World War II — the “good war” — we faced enemies that commanded military infrastructure comparable to our own. The enemy was both willing and able to meet us on the battlefield, and was capable of inflicting severe damage. To my mind, that parity helps justify actions we took that otherwise would be morally ambiguous at best: Hiroshima, Nagasaki, Dresden.

Today’s enemies are financed by immense oil wealth, but have virtually no industrial base of their own. Hamas buys missiles that it could not possibly produce and shoots them from Gaza into Israel. For the September 11 attacks, al-Qaeda took flying lessons at American flight schools, hijacked American jetliners and crashed them into buildings born of America’s industrial and architectural prowess.

Because today’s good guys are immensely more powerful than today’s bad guys, the bad guys have to change the context. They have to use our strength and our values against us. They count on the fact that we — America, Israel — will strive, at great risk to our own troops, to limit civilian casualties on their side. Israel could have killed every human being in the Gaza Strip with zero or close to zero Israeli casualties. Instead, Israel makes a practice of warning the human shields who live in houses that are targeted because they hold arms caches.

Meanwhile, Islamic fascists are more than willing to cause the deaths not just of our civilians, but of their own as well, because the PR exploitation of their own civilian casualties is a key weapon in their arsenal. The only thing Hamas values more than dead Israelis is dead Palestinians. Preferably Palestinian children. We face enemies who are willing to breed their own children for martyrdom.

Enemies practicing asymmetric warfare will always be able to inflict casualties, but the only way they can win is if they can persuade enough of us that it is somehow immoral to fight back. That’s why Rubin concludes that Oliphant — who in a different context would qualify as a classic example of a useful idiot — has scored a victory for Hamas.

4 thoughts on “Oliphant’s Cartoon Is Not Just Despicable, It’s Dangerous”