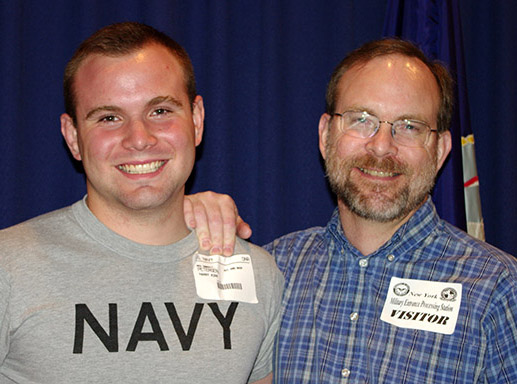 Seaman Recruit Harry Petersen with his proud father, minutes after being sworn in.
(That’s Harry on the left.)

After two tentative reporting dates came and went, Harry shipped out today following a brief swearing-in ceremony at Fort Hamilton, near the base of the Verrazano Bridge in Brooklyn. Also there to see Harry off were the Web Goddess, who took the picture; as well as Harry’s mother, Debra; his brother, Kyle; and Brenda, a family friend since Harry was a toddler.

No photography was allowed during the ceremony itself, so I’m just going to have to remember the look on his face as he and about 20 other young men and women, headed for all of the armed services, pledged to support and defend the Constitution of the United States against all enemies, foreign and domestic, and to bear true faith and allegiance to the same.

It’s unlikely that Harry will see this until he graduates from boot camp in eight weeks, and I don’t have much to add to what I said in a previous post, so I’ll keep this brief.Â  Godspeed, son, and thank you for your service to our country.

Update: OK, to be precise, WE were not allowed to take photographs during the ceremony, but there was a photographer there for the photo service Getty Images who had special privileges.Â  Harry’s visible in a few shots out of a batch of about 50, and there are two showing him hugging the Web Goddess and me.Â  Here’s the better of them (did I mention that the photo is copyright Getty Images 2009?) 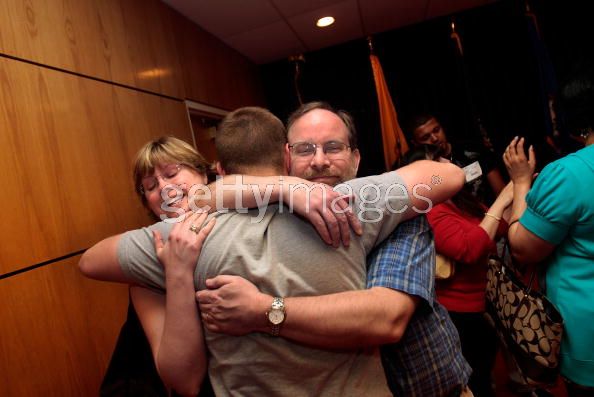