The economy is sending mixed signals — which at least is an improvement over just a few months ago.Â  Newsweek reports today that “the Fed has become both more optimistic and more pessimistic,” with GNP expected to recover slightly more quickly than previously expected, even while unemployment creeps slightly higher.Â  The term “jobless recovery” is being attributed to Fed Chairman Ben Bernanke, although the term actually was floated by a Senate Republican in a private discussion, and Bernanke responded only that “it could be.”

The bottom line is, whatever you have left in your retirement fund may start growing again, but if you’re looking for a job you’re still hosed.

The irony, of course, is that job creation depends on business confidence, which depends on economic growth, which in the long run depends on… higher employment levels. 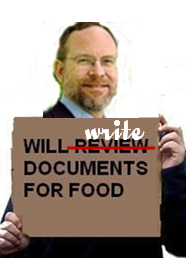 So for all you business owners looking to implement plans you’ve had on hold, if you’re still understandably wary of taking on new headcount, I have a solution:Â  Hire an independent consultant on a contract basis.

Contracting with a consultant is a much smaller commitment than hiring an employee, and your dollars will go further.Â  An independent consultant will know that he or she has to hit the ground running, so you can get a faster payoff on your project.

Huge consulting firms often use a senior partner to convince you to sign a contract, then assign twenty-somethings to do the actual work.Â  But with an independent consultant, the person you seal the deal with will be doing the actual work.Â  So don’t be put off by the fact that the independent consultant may be a little older — a greybeard, so to speak. You’re not buying all those years of experience, you’re just renting them.

This message is brought to you as a public service by KirkPetersen.net LLC.

(Disclosure: Photo is a composite — NOT created by the Web Goddess, who has actual Photoshop skills)