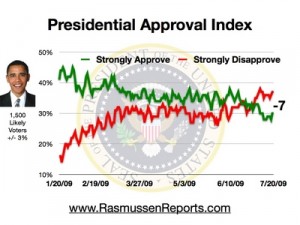 A few weeks after the November election, incoming White House Chief of Staff Rahm Emanuel famously said “You never want a serious crisis to go to waste.Â  And what I mean by that is, an opportunity to do things that you think you could not do before.”

Things like ramming through a mammoth “stimulus” bill now now now now now — never mind that nobody except the bill’s authors had even read it.Â  It was an opportunity to throw huge sums of money at various Democratic priorities — even though much of the money will not be spent until 2011 or later, and thus will have no current “stimulating” effect.

In today’s Wall Street Journal, Fred Barnes does a great job of tying a lot of pieces together.Â  In the process he helps make it clear why Obama has moved firmly into negative territory in the Rasmussen daily tracking poll. It would be worth your time to read the whole thing on the WSJ site, but you probably won’t, so here’s an excerpt:

It usually doesn’t happen this quickly in Washington. But President Barack Obama and congressional Democrats are finding that the old maxim that what goes around, comes around applies to them, too. Less than six months into his term, Mr. Obama’s top initiatives — health-care reform and “cap and trade” energy legislation — are in serious jeopardy and he has himself and his congressional allies to blame.

Their high-pressure tactics in promoting and passing legislation, most notably the economic “stimulus” enacted in February, have backfired. Those tactics include unbridled partisanship, procedural short cuts, demands for swift passage of bills, and promises of quick results.

With large majorities in Congress and an obsequious press corps, Mr. Obama was smitten with the idea of emulating President Franklin Roosevelt’s First 100 Days of legislative success in 1933. Like FDR, Mr. Obama tried to push as many liberal bills through Congress in as brief a time as possible.

He made a rookie mistake early on. He let congressional Democrats draft the bills. They’re as partisan as any group that has ever controlled Congress, and as impatient. They have little interest in the compromises needed to attract Republican support. As a consequence, what they passed — especially the $787 billion stimulus — belongs to Democrats alone. They own the stimulus outright.

The candidate who marketed himself as being above politics has, as president, descended into the arena. I have a special fondness for this theme, as it was the subject of my very first substantive post on this blog, “I Prefer the Chicago Politician to the Obamessiah“:

From a character standpoint, my biggest concern with Obama was the very thing that endeared him to many others â€” the idea that he was â€œnot a politician,â€ or was â€œa new kind of politician.â€ I never believed that to be the caseâ€¦ but enough people believed it that I had to consider the possibility. The idea of a president who is not a politician is scary. Itâ€™s like the idea of a Supreme Court justice whoâ€™s not a lawyer. Thereâ€™s no law against it, and it might even work out OK. But it makes no more sense to put a non-politician in the countryâ€™s top political job than it would to put a non-lawyer in the top legal job.

But it turns out Obama is a politician. After winning the Democratic nomination by appealing to the young, the idealists, the activists and the pacifists, heâ€™s swerved right so fast that many of his supporters have whiplash.

As the country increasingly recognizes that Obama is so a politician, Democrats in GOP-leaning districts increasingly will look ahead to the 2010 election.Â  They’ll start to distance themselves from the President, and they’ll scour the internet in search of any vaguely negative comment they made about the size of the porkulus bill.Â  The administration’s ability to steamroll Congress will, thankfully, decline.

Mr. Obama’s health-care and energy initiatives, the core of his far-reaching agenda, were bound to face serious opposition in Congress in any case. Hardball tactics and false promises have only made the hill he has to climb steeper. Now he may lose on both. The president and his congressional allies should have known better.