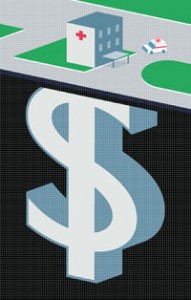 An article in the September Atlantic does the best job I have ever seen of describing why health care is so resistant to cost-control efforts.Â  At 11,000 words, “How American Health Care Killed My Father” is not a quick read, but it’s not a dry policy treatise by any means.Â  (Hat tip: TigerHawk.)

When David Goldhill’s father died from an infection he contracted in the hospital, Goldhill went looking for someone to blame.

But my dadâ€™s doctors werenâ€™t incompetentâ€”on the contrary, his hospital physicians were smart, thoughtful, and hard-working. Nor is he dead because of indifferent nursingâ€”without exception, his nurses were dedicated and compassionate. Nor from financial limitationsâ€”he was a Medicare patient, and the issue of expense was never once raised. There were no greedy pharmaceutical companies, evil health insurers, or other popular villains in his particular tragedy.

As a business executive, Goldhill is no enemy of capitalism or market-based systems.Â  As a self-identified Democrat, he is no enemy of government.Â  And while he may have started his year-long research effort in anger over his father’s premature death, he has produced an absorbing essay that is remarkably measured and clear-eyed. Anyone of any political stripe who cares about America’s health-care system would benefit from reading it.

Some excerpts, with emphasis added:

But health insurance is different from every other type of insurance. Health insurance is the primary payment mechanism not just for expenses that are unexpected and large, but for nearly all health-care expenses. Weâ€™ve become so used to health insurance that we donâ€™t realize how absurd that is. We canâ€™t imagine paying for gas with our auto-insurance policy, or for our electric bills with our homeowners insurance, but we all assume that our regular checkups and dental cleanings will be covered at least partially by insurance.

Insurance is probably the most complex, costly, and distortional method of financing any activity; thatâ€™s why it is otherwise used to fund only rare, unexpected, and large costs. Imagine sending your weekly grocery bill to an insurance clerk for review, and having the grocer reimbursed by the insurer to whom youâ€™ve paid your share. An expensive and wasteful absurdity, no?

Is this really a big problem for our health-care system? Well, for every two doctors in the U.S., there is now one health-insurance employeeâ€”more than 470,000 in total. In 2006, it cost almost $500 per person just to administer health insurance. Much of this enormous cost would simply disappear if we paid routine and predictable health-care expenditures the way we pay for everything elseâ€”by ourselves.

The unfortunate fact is, health-care demand has no natural limit. Our society will always keep creating new treatments to cure previously incurable problems. Some of these will save lives or add productive years to them; many will simply make us more comfortable. Thatâ€™s all to the good. But the cost of this comfort, and whether itâ€™s really worthwhile, is never calculatedâ€”by anyone. For almost all our health-care needs, the current system allows us as consumers to ask providers, â€œWhatâ€™s my share?â€ instead of â€œHow much does this cost?â€â€”a question we ask before buying any other good or service. And the subtle difference between those two questions is costing us all a fortune.

How would the health-care reform thatâ€™s now taking shape solve these core problems? The Obama administration and Congress are still working out the details, but it looks like this generation of â€œcomprehensiveâ€ reform will not address the underlying issues, any more than previous efforts did. Instead it will put yet more patches on the walls of an edifice that is fundamentally unsoundâ€”and then build that edifice higher.

You get the idea.Â  Read the whole thing.

(Illustration from The Atlantic.)

6 thoughts on “The Perverse Incentives of Our Health-Care System”