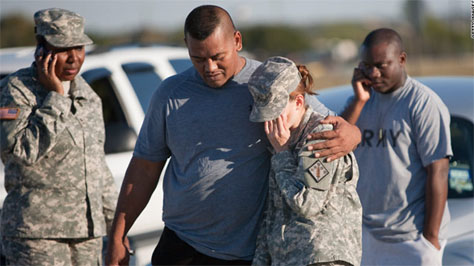 AP photo of a war zone in Texas

As more information emerges about jihadi-Major Nidal Hasan, I’m reconsidering my declaration that it’s “silly” to debate “whether Hasanâ€™s rampage could have been prevented if authorities had paid more attention to warning signs.”Â  Based on reports since I posted Sunday (actually late Saturday night), I might now refrain from using the word “silly.”

But I still believe it’s unrealistic to think atrocities can be prevented by flawless foresight based on evidence that seems screamingly significant in hindsight.

Here is the passage from Jenifer Rubin (a hard-working blogger with whom I frequently agree on other matters) that sparked my previous post:

The Postâ€™s own report tells us:

Six months ago, investigators came across Internet postings, allegedly by Hasan, that indicated sympathy for suicide bombers and empathized with the plight of Muslim civilians killed in Iraq and Afghanistan, according to a federal official briefed on the situation. The official, and another source, said investigators never confirmed whether Hasan was the author of the postings and did not pursue the matter.

And then we learn: â€œFriends and acquaintances said Hasan had been increasingly agitated over the U.S. wars in Iraq and Afghanistan, and he reportedly said the U.S. â€˜war on terrorâ€™ was a â€˜war on Muslims.â€™ Officials have seized Hasanâ€™s computer to determine his role in the blog posts and other writings.â€ It seems he even had a PowerPoint presentation. (â€Val Finnell, a classmate of Hasanâ€™s at the Uniformed Services University in Bethesda a few years ago, recalled a presentation that â€™started out with a semblance of a health issue but his PowerPoint turned into his view that the war was against Muslims. He brought that up throughout the year.â€)

Listen, ignoring reality and feigning indifference to the views and behavior of Major Hasan isÂ how we wound up with 13 dead and 30 wounded, right?

I have a confession to make.Â  Although I have no sympathy for suicide bombers, I do “empathize with the plight of Muslim civilians killed in Iraq and Afghanistan.”Â  Better lock me up.

Seriously, while everything in the passage above is clearly ominous now, there’s simply nothing there that would, in advance of the shootings, justify cashiering Hasan from the Army or putting him under physical surveillance as a potential jihadi.Â  And nothing short of those actions would have prevented the massacre.

Major Nidal Malik Hasan, the gunman who killed 13 at America’s Fort Hood military base, once gave a lecture to other doctors in which he said non-believers should be beheaded and have boiling oil poured down their throats.

Gulp. OK, if true, that’s a big fat warning sign.Â  But did any investigative authority know about these alleged statements before the shooting?Â  The Telegraph article doesn’t attribute the boiling-oil statement or put it in quotes, but the story appears to be based on discussions with Hasan’s former colleagues at Walter Reed.Â  Plenty of bloggers and pundits have cited this supposed statement, but I can’t find any independent reporting confirming it.

Here’s one thing the authorities did know before the shootings: Hasan carried out an extended email correspondence with “a radical cleric in Yemen who has criticized the United States for waging war against Muslims,” as the Washington Post and others report today. That comes closer than anything else I’ve seen to justifying complaints that Hasan’s rampage should have been prevented.Â  But it’s still not very close.Â  From the Post:

The FBI determined that the e-mails did not warrant an investigation, according to the law enforcement official. Investigators said Hasan’s e-mails were consistent with the topic of his academic research and involved some social chatter and religious discourse.

We can all fervently wish that the FBI had taken things further at the time.Â  But like any organization, the FBI has finite resources, and it doubtless spends a lot of time and energy gathering huge amounts of information, most of which ends up bearing no fruit. Any investigative agency must make decisions every day to refrain from pursuing this lead or that one.

I’m making only a limited argument here.Â  Despite admonitions that we should not “jump to conclusions” about Hasan’s motives, I’ve concluded that Hasan was a jihadi.Â  Certainly his movements and associations should now be examined in intense detail.Â  My point is just that while there may be comfort in the notion that the feds could have stopped Hasan, I don’t buy it, based on what has emerged to date. The various clues that now appear so ominous in the aggregate did not constitute a smoking gun when viewed individually a week ago.Â  It’s hard to protect against a lone gunman who is prepared to die.