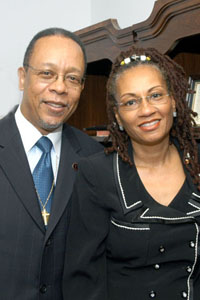 Not long after the Presidential election last year, the Web Goddess and I had dinner with four of our closest friends, who happen to be a black couple and a lesbian couple.Â  There was exactly one McCain voter in the room — which turns out to reflect almost precisely the voting results in our hometown of Maplewood, NJ.Â  (I would have guessed it had been even more lopsided.)

I don’t think of these friends primarily in demographic terms — we’re three couples who met through our local Episcopal church and found we enjoyed each other’s company.Â  But of course, race was a common conversation topic in those post-election days.Â  Sexual orientation also claimed some attention through California’s successful Proposition 8, which overruled the state Supreme Court’s decision legalizing same-sex marriage in that state.Â  On this issue, we all knew the vote at our dinner table would be 6-0 the other way.

Obama’s ground-breaking candidacy had inspired a huge increase in black voters around the country — and it was being reported that his coattails may have had an adverse effect on gay people in California, as about 70 percent of black California voters had voted to ban gay marriage.Â  (Later analysis asserted that 58 percent was a more realistic number — still well above the 49 percent of whites who voted similarly.)

One of our friends, who wants nothing more than to marry, in New Jersey, the woman she has been committed to for more than a decade, brought up this awkward confluence of race and orientation.Â  Her voice trailed off as she looked inquiringly at our black friends, and we all watched the husband shake his head helplessly.Â  “There’s a lot of homophobia in the black community,” he said softly.

These memories were stirred today by the publication today of an op-ed in the Washington Post about the D.C. Council’s vote this week to legalize same-sex marriage in the nation’s capital.Â  The headline that caught my eye was “Why Two Black D.C. Pastors Support Gay Marriage.”Â  It turns out they’re not just black — they’re Baptists, and leaders of “the first and only traditional black church in the District of Columbia to perform same-sex unions [non-marital commitment ceremonies].”

Christine and Dennis Wiley write that “our first-hand experience has convinced us that homophobia within the black church and the wider community is real,” and they thoughtfully discuss what they see as the historical reasons for this.

A more complicated element of black homophobia is the lingering influence of sexual stereotypes that originated during slavery. According to theologian Kelly Brown Douglas, the myth of “over-sexualized” black bodies portrayed black men as violent “bucks” who posed an ever-present threat to white women, and black women as “Jezebels” who seduced white men.

These stereotypes served to justify the whipping, lynching and castration of black men, and to excuse the sexual violation of black women by white men. They were just one element of what blacks had to struggle against to gain acceptance and respectability in white society, especially during the late 19th century and the first half of the 20th. On this matter, religion has often been a vehicle of suppression, accommodation and control. While the church was a refuge from the horrors of racism and played an empowering role in African American history, it also taught black people to repress behaviors — especially sexual behaviors — that might attract unwanted attention, appear uncouth or seem threatening to white people.

A final piece that shapes black attitudes toward same-sex marriage is the preoccupation with racism in the black community. This obsession, although justifiable, has led to a failure to appreciate how racism is inextricably connected to all other forms of oppression. Those who fail to see this connection may resent the comparison of gay rights with civil rights. But as Martin Luther King Jr. once said, “Injustice anywhere is a threat to justice everywhere.”

King also said, “the arch of the moral universe is long, but it bends toward justice.”Â  I firmly believe that same-sex marriage is a straightforward civil rights issue.Â  There’s only one acceptable outcome — and I believe I will live to see full marriage equality in this country.

Even in the socially liberal Episcopal church, the topic of gay equality has been controversial.Â  (Nationally, at least — in Maplewood, not so much.)Â  I marvel at the courage of these two black Baptist preachers, and I wish them Godspeed.

2 thoughts on “Civil Rights, and the Intersection of Race and Sexual Orientation”