K-Lo in The Corner linked the other day to a year-0ld National Review article about a potential next-generation GOP leader, Ted Cruz, the former Solicitor General of Texas.Â  Turns out he’s Princeton Class of 1992, for those of you who care about such things.Â  He needs some better photos, but I like the way he sounds.Â  From the article: 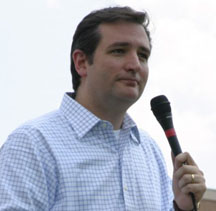 Cruz has no problem diagnosing whatâ€™s wrong with his party. For starters, he hates how the GOP â€œsystematically undervaluesâ€ the importance of communication. â€œWe heard a number of times Republicans speaking about Barack Obama and almost derisively saying, â€˜Well, he gives a good speechâ€™ â€” as if that were a moral failing, evidence that he must be superficial if he can give a good speech,â€ Cruz says. â€œI think what we misunderstand is that the ability to persuade and inspire is the single most important tool any public leader has. If you think about what was Ronald Reaganâ€™s greatest moment of leadership, I would suggest it was standing at the Brandenburg Gate, saying â€˜Mr. Gorbachev, tear down this wall.â€™ That was a speech!â€

â€œOne thing Republicans do that I think is disastrous is that many conservatives try and beat their chest and say, We are so terribly conservative â€” Attila the Hun, he was a squish! [But] what Reagan did was say, â€˜The values Iâ€™m talking about are commonsense American values that have been part of this country for over 200 years. Theyâ€™re the values that have been in every small town and every small business throughout this country.â€™ And he connected with people.â€

Cruz hasnâ€™t even made it through his first primary election yet, so itâ€™s perhaps premature to predict how far he will go in politics. But, in keeping with his own political vision, itâ€™s probably safe to say that Cruz is a conservative with a lot of opportunities ahead of him.

And he said the bit about limiting options and developing dependency before anybody had even heard the term “Obamacare”.

One thought on “As GOP Looks for Leaders and Ideas, It Should Consider “Opportunity Conservatism””