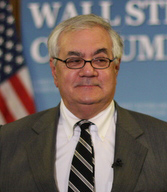 As longtime chairman of the House Financial Services Committee, Barney Frank was one of the key architects of the housing bubble, and of the crisis that followed the burst. Not the sole architect, of course — the roots of the crisis stretch back to the Carter administration. (See “In Defense of Wall Street Greed” nearly two years ago.)

But Frank has a lot to answer for.Â  As quoted in a previous post, here’s how Nobel Prize winning economist Gary Becker describes it:

During the run up to the crisis, Barney Frank and others in Congress encouraged Freddie and Fannie to absorb most of the subprime mortgages. In 2008 they held over half of all mortgages, and almost all the subprimes. They have absorbed even a larger fraction of the relatively few mortgages written after 2008. Freddie and Fannie deserve a considerable share of the blame for the crisis, but they continue to have strong political support. I would like to see both of them eventually dissolved, but that is unlikely to happen.

It may not be as unlikely as it seemed when Becker wrote those words in July.Â  Barney Frank’s on board with the idea.Â  Lawrence Kudlow takes up the story:

For years, Frank was a staunch supporter of Fannie Mae and Freddie Mac, the giant government housing agencies that played such an enormous role in the financial meltdown that thrust the economy into the Great Recession. But in a recent CNBC interview, Frank told me that he was ready to say goodbye to Fannie and Freddie.

“I hope by next year we’ll have abolished Fannie and Freddie,” he said. Remarkable. And he went on to say that “it was a great mistake to push lower-income people into housing they couldn’t afford and couldn’t really handle once they had it.” He then added, “I had been too sanguine about Fannie and Freddie.”

I think Chairman Frank watched these government behemoths descend into hell and then witnessed the financial catastrophe that ensued. And I think he has come to realize that the whole system of federal affordable-housing mandates that was central to the real-estate collapse â€” including the mandates on Fannie and Freddie and the myriad bad decisions made by private banks and other lenders in response to the government’s overreach â€” simply needs to be abolished.

Props to Barney Frank.Â  Let’s hope he can bring some of his fellow Democrats along with him.

One thought on “A Politician Admits a Mistake.
In Other News, Pigs Fly”