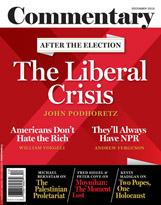 One should always be wary of highly partisan people who make sweeping post-election predictions about future elections (cf. Carville, James, 40 More Years: How the Democrats Will Rule the Next Generation, copyright 2009.) But while John Podhoretz’s essay “The Liberal Crisis” has a whiff of wishful thinking to it, his predictions are far more limited, and grounded in analysis of election results in the past half century.

Does Barack Obama now look like a loser? It would be foolish to write Obamaâ€™s political epitaph, though it would be even more foolish to assume that his 2008 performance before the national electorate offers much in the way of guidance about how he will fare a second time. A recent president whose election results most closely compare with his is George H. W. Bush, who won 53.4 percent in 1988 (slightly better, in fact, than Obamaâ€™s 2008 tally) and had, moreover, a 91 percent approval rating in March 1991. Twenty months later, in November 1992, Bush went on to secure a shockingly low 38 percent of the vote.

Obama is certainly in political peril. In 2008 he won independent voters by 17 points in 2008; on November 2, independents preferred Republicans by eight points, an unprecedented 25-point shift. The percentage of the electorate that called itself Democratic shrank by 9 percent (from 39 percent in 2008 to 36 percent this year). Republicansâ€™ participation grew from 32 percent to 36 percentâ€”proportionately, a 12 percent gain. Let us assume that Obama succeeds in changing the trend line in 2012 by bringing back half the independents his party lost in 2010 and increasing Democratic participation by a percentage point or two over Republicans. If he does so, he will not suffer the kind of defeat his party did in November. But he will still lose.

My “wishful thinking” reference above is based on the fact that much of Podhoretz’s essay focuses on the possibility that Obama will face a significant challenger from his left in 2012.Â  (Russ Feingold? C’mon…) But I think Podhoretz is correct in arguing that Obama’s need to protect his left flank may keep from tacking toward the center as deftly as Clinton did after the Republican midterm tsunami during Clinton’s first term.

Ever since Obama took office, leftists have issued complaints against him that, to the non-leftist ear, sound insane.They claim he has been too moderate, too compromising, too much of a technocrat. They say the $863 billion stimulus was too small by halfâ€”an assertion impossible to prove, and pointless in any case, since the stimulus that did become law was as large as the political system in Washington controlled entirely by Democrats could stomach. Liberals were and are angry that Obama gave up the so-called public option on health care, when he had no choice but to do so to win Democratic support to get the bill through the Senate.

In point of fact, Obama has done everything in his power to advance the most unshakably leftist agenda since Johnsonâ€™s time, and possibly since the days of Franklin Rooseveltâ€”with remarkable results. He should be celebrated by liberals and the left, not criticized by them, and certainly not abandoned by them.

2 thoughts on “Can Obama Win Back Independents Without Further Alienating the Left?”