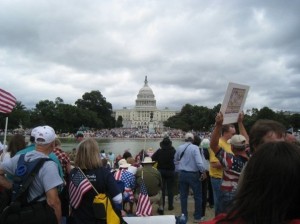 In an episode of The West Wing, Abbey Bartlet, the president’s wife, was talking with Amy Gardner, the former girlfriend of Deputy Chief of Staff Josh Lyman:

Abbey Bartlet: How did you live with him? He beat Max out of the 12 million earmarked for vaccine education and when I said I wanted the 12 million, he said, “So did I. And at the end of the prizefight, you look at the guy who’s dancing around and that’s who won.” … Don’t you wanna kill him when he says things like that?

Amy: My problem is I wanna jump him when he says things like that.

Amy portrays an aggressive, no-nonsense activist, former Director of the Women’s Leadership Coalition, and subsequently Abbey Bartlet’s Chief of Staff.Â  Political victory can be an aphrodisiac in Washington.Â  And despite Republican complaints that the deal did not go far enough, after the month-long debt ceiling prizefight it’s the Tea Party representatives in the House who are dancing around the ring, or they should be.

The advocates of smaller government have won a huge victory.Â  In January, President Obama demanded a “clean” debt ceiling increase, one not tied to any spending cuts or entitlement reform.Â  Then he pinned his prestige to the notionÂ  that any deal must be “balanced,” a code word for tax increases.Â  But at the end of the day, he was forced today to sign a bill making dollar-for-dollar spending reductions in exchange for a debt-ceiling increase of $2.1 trillion, without a dollar in tax hikes.Â  In just six months, they shifted the debate from whether there would be spending cuts to how much would those cuts be.

Obama gave in because the deal gave him the one thing that he truly cared about — a debt limit that will take him past the end of his first, and I hope only, term in office. And while the Tea Party should be dancing around the ring, listen to the Democrats screaming “we was robbed!”Â  Taranto:

Did Vice President Biden liken Tea Party Republicans to terrorists in a meeting with House Democrats? Eyewitnesses say yes, but he denies it, Politico reports:

Biden was agreeing with a line of argument made by Rep. Mike Doyle (D-Pa.) at a two-hour, closed-door Democratic Caucus meeting.

“We have negotiated with terrorists,” an angry Doyle said, according to sources in the room. “This small group of terrorists have made it impossible to spend any money.”

Biden, driven by his Democratic allies’ misgivings about the debt-limit deal, responded: “They have acted like terrorists.”

Biden’s office initially declined to comment about what the vice president said inside the closed-door session, but after Politico published the remarks, spokeswoman Kendra Barkoff said: “The word was used by several members of Congress. The vice president does not believe it’s an appropriate term in political discourse.”

Whether Biden said it or not, all parties seem to agree that Doyle and perhaps other House Democrats did. And plenty of prominent elite liberals have sounded the theme. It’s become commonplace on the opinion pages of the New York Times, where Joe Nocera rants:

You know what they say: Never negotiate with terrorists. It only encourages them. These last few months, much of the country has watched in horror as the Tea Party Republicans have waged jihad on the American people. .Â .Â . Their goal, they believed, was worth blowing up the country for, if that’s what it took. .Â .Â . For now, the Tea Party Republicans can put aside their suicide vests. But rest assured: They’ll have them on again soon enough. …

Hey, what ever happened to civility?

Gracious.Â  Taranto’s closing line refers to the phony liberal calls for “civility” after much of the news media jumped to the incorrect conclusion that Rep. Gabby Gifford had been shot by a right-wing nut egged on by conservative rhetoric in Arizona.

Listen to the hyperventilating on the left! Nocera, above: “Their goal, they believed, was worth blowing up the country for, if that’s what it took.”Â  Perhaps my favorite quote comes from Fareed Zakaria, whom I normally consider to be reasonably sensible:

â€œThe Tea Party has an agenda,â€ Zakaria told host Anderson Cooper, and argued â€œit cannot get it through the political democratic process.â€ As a result, Zakaria argues that they have said â€œweâ€™ll blow up the country if you donâ€™t listen to us. We will hold hostage the credit of the United States, the good standing of the United States and weâ€™ll blow it up.â€

This is nonsense on stilts.Â  In fact, the Tea Party members, who were elected in 2010 in a historic rebuke to Obamacare and the Democrats’ free-spending ways, have just used the “political democratic process” to win an important victory on behalf of smaller government.Â  Nobody was going to blow up anything.Â  Tea Party members were elected with what they believe is a mandate to reduce the size of government.Â  It would have been irresponsible of them to pass up a chance to start moving in that direction.

Much of the news media is guilty of malpractice for pretending that August 2 was a consequential deadline.Â  The cable news networks and even the Washington Post had clocks ticking down the number of hours and minutes until midnight August 2, sometimes labeling those clocks as a countdown to default.Â  But if the clock had struck midnight without a deal in place, the awful consequences would have been… absolutely nothing.

The country would continue to pay most of its bills, including all of its debt-servicing bills, through the time-honored business practice of “maturing their payables” — making some creditors wait.Â  The next major step would be a partial shut-down of government, which certainly would have ratcheted up the drama.Â  But we were weeks away from any danger of default.

Consider: There are 60 Representatives in the House who self-identify as members of the Tea Party Caucus.Â Â  That’s one out of every four Republicans, one out of every seven representatives.Â  By way of comparison,Â  the Congressional Black Caucus, which has been a powerful constituency in the Democratic Party since the 1970s, currently has 43 members.

So to Rachel Maddow and Bill Maher and the Kos Kiddies and other giggling commentators who have taken such delight in misreferring to the Tea Party with a slang term for an obscure sexual act, this would be a good time to consider growing up.

(Picture of a 2009 Tea Party rally from Wikipedia.)