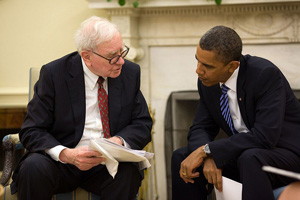 President Obama plans to “call for a new minimum tax rate for individuals making more than $1 million a year to ensure that they pay at least the same percentage of their earnings as middle-income taxpayers,” according to the New York Times.

Mr. Obama, in a bit of political salesmanship, will call his proposal the â€œBuffett Rule,â€ in a reference to Warren E. Buffett, the billionaire investor who has complained repeatedly that the richest Americans generally pay a smaller share of their income in federal taxes than do middle-income workers, because investment gains are taxed at a lower rate than wages.

Buffett made this complaint most recently last month, in an op-ed in the New York Times titled “Stop Coddling the Super-Rich.”Â  The sound bite you hear most often is that Buffett pays a lower tax rate than his secretary.Â  (Sometimes this gets distorted as “Buffett pays less tax than his secretary,” which certainly is false.)Â  Here’s how Buffett put it in the op-ed:

Last year my federal tax bill â€” the income tax I paid, as well as payroll taxes paid by me and on my behalf â€” was $6,938,744. That sounds like a lot of money. [Ya think?-KP] But what I paid was only 17.4 percent of my taxable income â€” and thatâ€™s actually a lower percentage than was paid by any of the other 20 people in our office. Their tax burdens ranged from 33 percent to 41 percent and averaged 36 percent.

The reason, of course, is that most of Buffett’s income comes from dividends and capital gains, which are taxed at what Buffett calls a “bargain rate” of 15%.Â  Buffett neglects to mention why investment gains are taxed at a lower rate.Â  It’s because this income already has been taxed at the corporate level before it ever gets to the investor.Â  At Commentary’s blog, John Steele Gordon does the math, and makes two good points:

It has nothing to do with fairness, it has everything to do with class warfare, for this would be nothing more nor less than a whacking great tax increase on capital gains and dividends on those who earn more than $1 million a year. In other words, they would be penalized for their success at creating wealth.

Warren Buffettâ€™s Berkshire Hathaway Corporation paid $5.6 billion in corporate taxes last year on income of $19 billion, a 29 percent rate. … Warren Buffett owns about 30 percent of Berkshire Hathaway, so he, in a very real sense, paid not just theÂ $6[.9] million in federal taxesÂ he claimed in his Times article, but $1.68 billion more in the form of corporate taxes.

For the “nonsense” I mention in the headline, let’s go back to Buffett’s op-ed.Â  In addition to ignoring the reality of corporate taxation, Buffett makes this stunningly dishonest statement:

I have worked with investors for 60 years and I have yet to see anyone â€” not even when capital gains rates were 39.9 percent in 1976-77 â€” shy away from a sensible investment because of the tax rate on the potential gain. People invest to make money, and potential taxes have never scared them off.

Really, Mr. Buffett? Not even at the margins? Of course, if I’m 95% sure an investment will double in value in X years, I’ll place that bet whether the tax rate is 15% or 40%.Â  But how often does anybody have that level of certainty?

A venture capitalist may invest in dozens of startups, knowing that most will go bust, but willing to bet that one or two will pay off big enough to make it all worthwhile.Â  Are you saying tax rates are not part of the calculus at all?Â  Really?