Cliff May of the Foundation for the Defense of Democracies is always worth reading, never more so than in his syndicated column today (oops, it’s after midnight, I mean yesterday). 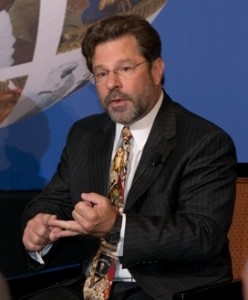 In Robert Kagan’s brief but insightful 2008 book, The Return of History, the author concluded that “great power nationalism has returned to Russia and with it traditional power calculations and ambitions.”

Kagan puts this into historical context, noting that there is no international consensus on the optimal form of governance. On the contrary, “the struggle between liberalism and autocracy has endured since the Enlightenment.” It was not settled by World War I or World War II or by the Cold War. Those who rule Russia, as well as those who rule China, Iran, Syria, and many other nations are committed to maintaining strong central governments, “managing” their populations through coercion, harassment, imprisonment, and when necessary â€” or even just convenient â€” murder, as well as maximizing power on the world stage through whatever means are available.

“The modern liberal mind,” Kagan argues, “may not appreciate the enduring appeal of autocracy in this globalized world.” But autocrats, he adds, really do “believe in autocracy. They see it as a superior form of government. As have rulers and prominent political thinkers going back to Plato and Aristotle, they regard democracy as the rule of the licentious, greedy, and ignorant mob,” which renders it inherently weak, unstable, and chaotic. Recent events, not only in modern Greece, no doubt reinforce this view.

Much as we might wish otherwise, the ideal of an “international community” that embraces peace, freedom, human and civil rights, tolerance, democracy, and the rule of law as universal values is a fiction, a fantasy, a pipe dream.

To coin a phrase, read the whole thing. (Disclosure: I did not actually coin that phrase.)