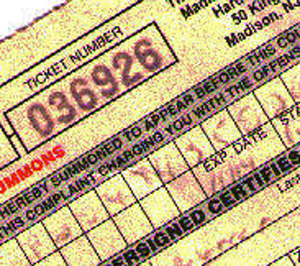 I try to learn something new every day.Â  On Friday I learned that in Madison, NJ, the fine for driving with an expired registration is $54.

Now, I’m a rule-of-law kinda guy.Â  Sometimes civil disobedience can be warranted, but generally speaking, I believe laws should be obeyed.Â  Bad laws should be changed, not broken.Â  A failure to enforce any law leads to diminished respect for all laws.

(I’m even opposed to the “neighborhood play” in baseball.Â  The infielder should have to step on second base while holding the ball to start a double play.Â  But I digress.)

I reflected on this (not the baseball part) at the end of my morning commute Friday, after a Madison police officer rolled to a stop behind me in the parking lot where I work, blocking me in.Â  I had seen the black-and-white SUV a mile earlier, parked in a driveway, pointed outward, watching the traffic go by.Â  I checked my speed, slowed down slightly, and kept cruising toward work.

Turns out he ran my plates and found the expired registration.Â  I’ve watched enough TV to know that it’s really a bad idea to get belligerent with someone who carries both a ticket book and a weapon, so I fought back some of the snarky remarks that came to mind.Â  A second patrol car also followed me into the parking lot, and the patrolman checked for wants and warrants while the sergeant was writing the ticket… and I’m thinking, isn’t there any real crime in Madison?Â Â  And: Isn’t there a doughnut shop nearby or something?Â  (The latter is particularly unworthy — he could have been eating a doughnut, but instead he was doing his job.)

The sergeant told me my registration was expired, and asked to see my credentials.Â  I pulled the paperwork out of my glove compartment and looked at the registration.Â  Ha! It expired at the end of September — only two weeks ago that day!Â  I can talk my way out of this!Â  I’m starting to make that case to him and I hear him say, “if it were a day or two, I could let it go, but two weeks, I’ve got to give you a ticket.”Â  Oh.Â  I felt the time-space continuum snap into a different shape.

I imagined I was outside myself watching this on TV.Â  There were lots of cars going in and out of the parking lot, people looking at me — I made a point of smiling bravely.Â  One of my co-workers walked by, and I asked her to send a search party if I’m not in the office in half an hour.Â  Just hangin’ out here, having a chuckle with my homies in uniform.

There was even a kind of good-cop, bad-cop dynamic.Â  The sergeant said he could write me up for “Failure to exhibit D.L. or Reg,” which sounds like the same thing but carries a $180 fine, but he wasn’t going to do that.Â  The patrolman walked over from his cruiser, handed my license to the sergeant and said “no wants or warrants — you’re not going to have him towed, right Sarge?”Â  Naw.

The sergeant told me I have the right to contest the summons, and showed me the relevant court date on the ticket.Â  Hm… should I try to take it to court, given that I’m, like, obviously guilty and stuff?

“It’s really important to keep your registration current,” he said.Â  Yes, I gathered that.Â  I paid it online as soon as I got home.

When the sergeant handed me back my credentials, I shook his hand and thanked him for his service.