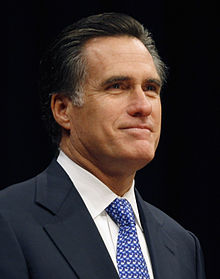 Months ago it became clear that I was not going to fall in love with anybody in the Republican field.Â  Ronald Reagan wasn’t coming back.

Chris Christie produces echoes of the Great Communicator, but he never had any intention of running.

I tried to generate some enthusiasm for Tim Pawlenty, but I didn’t work hard at it because he showed no signs of getting any traction.

When Rick Perry belatedly got into the race, I took a hard look at him.Â  Too much of a social conservative for my taste, but that would help him with part of the Republican base, and I liked the fact that he had governed a very large state.Â  But he started chewing on his toes almost immediately, and ultimately it seemed almost like he didn’t even want the job.

I was sorry to see Herman Cain flame out, but I sure didn’t want him to get the nomination.Â  He would have complicated the Left’s phony “racism” gambit, but he clearly had given very little thought to foreign affairs — the most important arena for any president.

When Newt Gingrich debuted as the not-Romney flavor of the week, I was surprised — I thought his campaign blew up months ago.Â  (Or maybe years ago.)Â  I figured he would fade quickly, but he’s already held on at the head of the polls longer than I expected — and the Iowa caucuses are only three weeks away.

As one prominent Republican after another steps forward to remind us that Gingrich is a hothead, Ross Douthat explains why the former Speaker’s vaunted debating skills hold little promise of overcoming President Obama’s incumbancy advantage:

Gingrich might debate circles around Obama. He might implode spectacularly, making a hot mess of himself while the president keeps his famous cool. But either way, setting up a grand rhetorical showdown seems unlikely to supply a disillusioned country with what it’s looking for from Republicans in 2012.

Conservatives may want catharsis, but the rest of the public seems to mainly want reassurance. They already know Barack Obama isn’t the messiah he was once cracked up to be. What they don’t know is whether they can trust anyone else to do better.

Last year, when the President and his party were foisting Obamacare on an unwilling public, the conventional wisdom was that Romney couldn’t possibly win the Republican nomination because he had implemented something similar in Massachusetts.Â  That made sense to me, and Romneycare is part of the reason Republicans have been flirting with one not-Romney after another for months.

But if Romney wins the nomination, I think he’ll be able to differentiate himself from Obama on healthcare pretty easily. It’s one thing to launch an experiment in a single state with broad bipartisan support.Â  It’s quite another to annex one-sixth of the nation’s economy without a single Republican vote in either house of Congress.

The other Republican complaint about Romney is that he isn’t conservative enough. But that also means he has a better chance of defeating Obama in a center-right nation.

Is America ready for a president who adheres to a faith that is only slightly older and slightly more reputable than Scientology?Â  Only time will tell, but there are 15 Mormons currently in Congress, including Senate Majority Leader Harry Reid, and I don’t think the Democrats should bank on the religion issue.

The saying is, “you can’t beat somebody with nobody” — and any sitting president is a somebody.Â  Romney’s not exactly charismatic or inspirational, and the risk is that he becomes the Republican analog to John Kerry.Â  Lots of people voted against George Bush in 2004, but hardly anybody voted for Kerry.

But Romney has a strong record of executive leadership, both in business and government.Â  It’s his second trip through the crucible of a presidential campaign, so there presumably are no skeletons left in the closet.Â  He has the best chance of beating Obama, and the country literally can’t afford four more years of this administration.

Ever since I realized that Michele Bachmann had no chance, I’ve told people that I’ll be voting for “whichever flawed candidate the Republicans nominate.”Â  Today I’m endorsing the flawed candidacy of Mitt Romney.