I’m more inclined to believe in the Tooth Fairy.

I think President Obama played a very bad hand as well as he could with his speech last night.Â  But that analogy doesn’t quite work, because a bad hand in a card game is a function of chance.Â  Obama (and Kerry) didn’t get here by chance, they created this situation through their own impulsiveness and lack of message discipline. 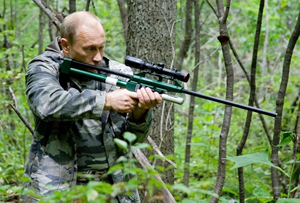 In a file photo, Putin uses a tranquilizer gun to sedate a tiger. The metaphor writes itself.

1. The original “red line” comment in August 2012 was an ad lib in response to a question at a news conference. “With such an evocative phrase, the president had defined his policy in a way some advisers wish they could take back,” The New York Times reported.

2.Â  Obama said he would use his authority as commander-in-chief to punish Assad militarily for using chemical weapons.Â  As public and Congressional opposition mounted, he then abruptly decided in a Friday-evening stroll with his chief of staff to seek authorization from Congress (despite declining to consult Congress before attacking Libya).

3.Â  As it became clear that the authorization effortÂ  would lose badly in the Republican House and might lose in the Democratic Senate, John Kerry floated a nonsensical hypothetical about how Assad could avoid an attack by turning over all of his chemical weapons to the “international community.”Â  In the next sentence, he noted (correctly) that this “obviously” will not happen.

4. But former KGB operative Putin recognized an opportunity when he saw it.Â  Putin remembers, even if Obama does not, how adeptly a dictator can string out a UN search for weapons of mass destruction (cf: Hussein, Saddam, 1991-1998 and 2002-2003).Â  So Putin paused in his review of Edward Snowden’s hard drive long enough to throw a lifeline to his Syrian ally and offer to develop a plan for chemical disarmament.

5. This allowed Obama to save face by asking Congress to postpone a vote he knew he would lose, “while we pursue this diplomatic path.” It’s a path on which Putin and Assad will lead Obama in circles.

Max Boot at Commentary did a good job of laying out the patchwork nature of the speech, then asked:

What, one wonders, was the point of the speech? Was it simply that the White House had already booked the TV time and wanted to carry on regardless of the facts? Or does Obama imagine that his stern words will cow Assad into compliance even as it is obvious that opposition in Congress will not allow air strikes?

The former comes closer to the mark, but I think he carried on with the already-scheduled speech because of the facts, not regardless of them.Â  The fact is that canceling the speech would have reinforced the impression of utter disarray.Â  Giving the speech was an opportunity to look presidential, which he did pretty effectively.Â  It was an opportunity to emphasize the horror of chemical weapons, which he did very effectively.Â  He may have moved the needle on public opinion by an “unbelievably small” amount (sorry, I couldn’t resist).

But he may also have set one more trap for himself.

“If diplomacy fails, he’s painted himself in a corner” by laying out the moral case for punishing Assad, said GOP Sen. Lindsey Graham, a leading advocate of punishing Assad militarily. “The leader of the free world can’t say all these things and at the end of the day do nothing.”

(2008 photo of Putin from premier.gov.ru, via Wikipedia)

2 thoughts on “Vladimir Putin as Peacemaker?”