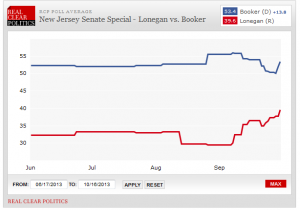 As you can clearly see in the chart, the polls have tightened, but Democratic Newark Mayor Cory Booker maintains a 14-point edge in his race against Republican Steve Lonegan, the former mayor of some town that I don’t know where it is.Â  Not a hanging-chad situation.

The weird timing is the brainchild of Republican Governor Chris Christie, who didn’t want Booker’s name on the same ballot as his own.Â  Even though they’re running for different offices, the popular Booker can be expected to boost Democratic turnout.Â  Christie’s re-election is not in doubt — he maintains a 28-point lead over Democrat Barbara Buono.Â  But every seat in the legislature will be decided on November 5, and Christie wants as many Republican seats as possible.

This deeply cynical ploy will cost New Jersey taxpayers $12 million for the special election, which makes me annoyed at my off-and-on hero Christie.Â  On the other hand, it’s kind of ingenious, and it will probably work out for him.

If I were going to vote today, I’d have to figure out how to cast my ballot.Â  Steve Lonegan is the Republican, which makes him the logical choice for me.Â  But I like and admire Cory Booker — I live in a suburb of Newark, and I think he’s providing the kind of inspirational leadership that the city needs.

I’m also a big fan of civility in public discourse.Â  Candidates have to say negative things about their opponents during election campaigns, of course, but they shouldn’t go over the top.Â  Lonegan yesterday said Booker had been “a total failure as the mayor of Newark,” which simply isn’t true.Â  Uniquely among Newark mayors of the past half-century, Booker hasn’t even been indicted for anything, let alone convicted.Â  So you’ve gotta give him that.