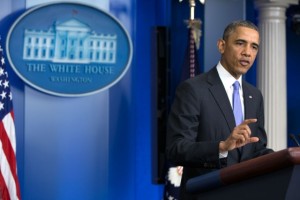 The President’s administrative decision to ignore another section of the Obamacare legislation for a year does not redeem his promise that “if you like your health plan, you can keep it,” but it’s a significant step in that direction.  It may slow the stampede of Democratic legislators seeking to distance themselves from the President, but it won’t eliminate it.  Yesterday 39 House Democrats voted for a Republican bill that would go slightly farther than the President did yesterday.  Politico reports:

It’s a significant show of disloyalty to the White House, but House Democrats had expected the defections to be far higher before the Obama administration said Thursday that it would pursue an administrative fix to the cancellation problem.

While Obama may have bought himself a little time, let’s pause for a moment to consider the plight of the health insurance industry.  No, really. The Obamafix hurts the insurance companies in three ways.

1. It worsens the problem of adverse selection.  The people who opt for their old plans will disproportionately be those who would have to pay more for coverage under Obamacare.  The whole financial structure of the law is based on convincing young, healthy people to overpay for insurance they don’t need, thereby subsidizing older, sicker people who cost the insurance companies a lot of money.  That’s why there’s an individual mandate to purchase insurance in the first place.

The Obama administration may not be ready for Obamacare but the insurance industry is. The health insurance companies spent the last many months rolling their old policies off the books and replacing them with the 2014 Obamacare compliant products––Bronze, Silver, Gold, and Platinum.

Cancellation letters have been sent. Their computer systems took months to program in order to be able to send the letters out and set up the terminations on their systems. Even post-Obamacare, the states regulate the insurance market. The old products are no longer filed for sale and rates are not approved. I suppose it might be possible to get insurance commissioners to waive their requirements but even if they did how could the insurance industry reprogram systems in less than a month that took months to program in the first place, contact the millions impacted, explain their new options (they could still try to get one of the new policies with a subsidy), and get their approval?

Plus, there will be increased ongoing costs for administering both sets of plans throughout 2014.

3. It sets the insurance companies up as the villains. Insurance companies have to decide very quickly whether to play along with Obama’s desperate gambit.  Playing along is very much not in their financial interest in the short term… but how much latitude do they have to make a prudent business decision and stand by the cancellations?   Remember, this is the president who, in the auto industry crisis, summarily fired the head of GM, forced Chrysler to begin selling itself to Fiat, and summoned the auto executives to the White House to tell them, “My administration is the only thing between you and the pitchforks.”

The president’s action is going to cost the health insurers a lot of money, and the only way for them to recoup that money will be by raising premiums in future years. Yes, I know that many consider Obamacare to be a giveaway to the health insurers, by forcing everyone to buy their products.  But I don’t think the industry is particularly grateful for Obamacare this week.

Meanwhile, whitehouse.gov still says ” If you like your plan you can keep it and you don’t have to change a thing due to the health care law” — now a full week after Politico pointed out that the falsehood is still there.  The phrase has been indefensible for longer than a week, of course, but I count the Politico story as the event that destroyed the fig leaf of a possible excuse that it’s just old website content that hasn’t been updated.

You know you’re in trouble when utter incompetence is your only defense against a charge of lying.