I wrote this in 2010, but have not published it until today, February 28, 2020. I wrote the headline today, but I have not otherwise updated time references.

Twenty-seven years ago, on October 16, 1983, a deeply troubled young woman let go of her last hold on life, and tumbled off the Golden Gate Bridge. Her name was Julie Ann Petersen, and with her suicide I became an only child. She was 23, so she’s been gone now longer than we had her. 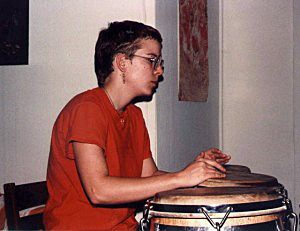 Julie was gay. Julie was a musician. All of this comes to mind of course because another young gay musician recently chose to jump off the side of a bridge rather than face what was on the other side.

When I first heard about Tyler Clementi, who killed himself after his roommate allegedly videostreamed over the Internet his sexual encounter with another man, I tried to stay away from the coverage of the story. There was no way to escape glimpses of website headlines and snippets on the radio, but with limited data input, my brain processed the news incompletely â€” it was several days before I learned the critical detail that the suicide involved a bridge. To the extent I allowed myself to think about it, I assumed Tyler had been ‘outed’ while still conflicted about his sexuality, and that he couldn’t bear living in a world that knew his secret. In fact, he was out to his family and the people who knew him best.

Julie’s story was different — she had been out and proud for several years. Society was much less accepting in the early 1980s, so Julie moved from our home in Albuquerque to San Francisco. She cropped her hair short, and traveled to lesbian-friendly women’s music festivals.

She died four years before the introduction of Prozac, the first of a new class of antidepressants. Almost by definition, someone who commits suicide is either depressed or panicked. She had attempted suicide several times, starting in high school. Her mental health and her sexual identity of course were intertwined — how could they not be? But Julie did not kill herself because of a fear of being outed.

My sister’s final surrender came five weeks after I married my first wife. Money was tight all around, and Julie had not made the cross-country trip for our small civil wedding ceremony in New Jersey. She never met my first wife (or her two future nephews). She never met my current wife, who has always wanted a sister. 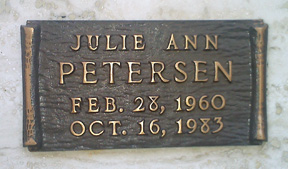 Many of the details have faded over the years, but I clearly remember sitting on the sofa next to my recent bride while a staff member from a mental facility in San Francisco explained over the phone that my sister was dead. I remember the hissing sound of my then-wife’s sharp intake of breath after I ended the call and told her the news.

That gasp touched off a futile effort — which continues today, a quarter-century later — to figure out how to disclose this information without sucking all the oxygen out of the conversation. Even after all these years, I have yet to find a nonchalant way to tell someone that my sister jumped off the Golden Gate Bridge.

Whenever a casual conversation turns to the subject of someone’s siblings, I start to tense up, hoping to avoid the question, “What about you, Kirk — do you have any brothers or sisters?”

Here are some of the gambits I’ve tried in response to that question:

The less I disclose initially, the more the mood shifts when the full details emerge. I’d be more than happy to get back to talking about whatever was the previous topic — backyard barbecues, or family reunions, or (someone else’s) nieces and nephews. But the suicide of a close family member seems to trump any other subject, and the Golden Gate just gives it iconic power.

In trying to process the information, people want to ask questions, and sometimes they do. Depending on the circumstances, I generally answer as blandly as I can — it seems less disruptive than saying ‘I’d rather not talk about it.’ (Nobody yet has asked the question that echoes faintly in the back of my mind: ‘Why couldn’t you save her?”)

People feel bad for bringing up the subject, so I’ve struggled to find the right level of unconcern in what I say once the news is out. I always emphasize how long ago it was, but that pales beside the fact that the suicide is less than a minute old to my listeners.

I don’t want my conversation partners to think they need to comfort me, but I don’t want to seem flip or cavalier. I love (loved?) my sister, I mourn her passing and I pray that she is at peace. My gay rights advocacy is in part a tribute to her.

But part of me is big-time pissed off at her.

I’ve come to believe that under most circumstances, there is nothing noble or romantic or in any way valid or acceptable about suicide. Suicide is an abomination, a defilement of God’s temple. A person who commits suicide is not a victim — he or she is a perpetrator. The victims stay behind and cope with the guilt and the grief.

so the other night i had a guy over. I had talked to my roommate that afternoon and he had said it would be fine w/him. I checked his twitter today. he tweeted that I was using the room (which is obnoxious enough), AND that he went into somebody else’s room and remotely turned on his webcam and saw me making out with a guy. given the angle of the webcam I can be confident that that was all he could have seen.

so my question is what next?

I could just be more careful next time…make sure to turn the cam away…
buttt…
I’m kinda pissed at him (rightfully so I think, no?)
and idk…if I could…it would be nice to get him in trouble
but idk if I have enough to get him in trouble, i mean…he never saw anything pornographic…he never recorded anything…

I feel like the only thing the school might do is find me another roommate, probably with me moving out…and i’d probably just end up with somebody worse than him….I mean aside from being an asshole from time to time, he’s a pretty decent roommate…

Julie died not just before the advent of modern antidepressants, but also before the era of the Internet. That fact has saved me from the exercise of combing through Julie’s online presence, looking for answers.

I imagine Tyler’s parents examining the post above, and the handful of additional posts cit2mo made before the thread devolved into speculation (followed by certainty) that the person posting is the Rutgers student in the news. They would look in vain for any hint of suicidal ideation (“Could we have saved him?”). They would see instead anger, remarkably understated (“Should his tendency to suppress emotion have been a clue?”), paired with a problem-solving approach to responding to the roommate’s violation.

What the roommate did was wrong, but I’m appalled by the blood-lust behind some of the commentary about him. This isn’t a hate crime. There’s no overt gay-bashing in the roommate’s Twitter feed, nothing more inflammatory than the statement “I saw him making out with a dude. Yay.”

The roommate isn’t a monster, he’s a jerk. His reckless prank could just as easily have targeted a heterosexual roommate. The story became a tragedy only because Tyler Clementi raised the stakes in the most dramatic way possible. The roommate is charged, properly, with invasion of privacy, as is a female student who seems like a bystander. Some people are outraged that the maximum penalty is five years in prison. I favor a plea bargain and probation. [The female student was sentenced to community service in a plea agreement. The roommate ultimately pleaded guilty to attempted invasion of privacy, a felony. He served 20 days of a 30-day sentence.]

I mourn for Tyler Clementi, even as a part of me judges him. (Fairly or otherwise, I’m mad at him, too.) I mourn without reservation for his family, whose pain will diminish but may linger for the rest of their lives. I applaud the It Gets Better Project, which features gay adults urging tormented gay teens to realize that they can have love and happiness in their future. I hope it will dissuade some young people from adopting a permanent solution to a temporary problem.

One thought on “She Would Have Turned 60 Today”