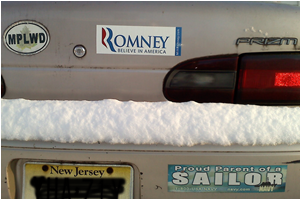 Much to my annoyance, Newt Gingrich has reshuffled the deck by trouncing Mitt Romney in the South Carolina primary.Â  Coming on top of the announcement from Iowa that they think maybe Rick Santorum actually won the caucuses there (I am so glad we entrust Iowa with such a pivotal role in presidential politics), we have three contests won by three different candidates, for the first time since 1980.

I’ve already got the Romney bumper sticker on my car.Â  Can we just move on already?

Web Goddess: “Please tell me that you won’t vote for Gingrich.Â  You said it yourself, he’s temperamentally unsuited to the presidency.”

It seems very clear that Marianne Gingrich’s 11th-hour attack actually helped her ex-husband. Apparently conservative qualms about infidelity are outweighed by loathing of the mainstream media.Â  That’s Gingrich’s theory in the interview below, where he also acknowledged that he fully expected to be put on the spot in that debate.

As Gingrich concedes in the video, if it were a popularity contest, Obama would win in a walk, “he’s a very likeable person, but the presidency is not about likeability.”Â  In the clip, Erin Burnett talks about a conservative voter who switched from Romney to Gingrich because the latter is “a complete person.”Â  Apparently one American out of 20 has been married more than twice — that’s a bit higher than I would have guessed.