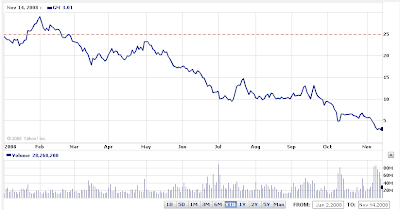 Look at the bright side – GM stock
only has $3 farther to fall. (From Yahoo Finance)

The more I read and think about a potential further bailout of the auto industry, the nuttier the idea sounds.

Michael E. Levine is a former airline executive, so he knows about bankruptcy. He puts it this way in today’s Wall Street Journal:

General Motors is a once-great company caught in a web of relationships designed for another era. It should not be fed while still caught, because that will leave it trapped until we get tired of feeding it. Then it will die. The only possibility of saving it is to take the risk of cutting it free. In other words, GM should be allowed to go bankrupt.

Even one of the auto industry’s hometown papers, the Detroit News, said in an editorial Friday that bankruptcy might be preferable to the appointment of an automotive “czar,” an idea that has been floated by the Obama transition team.

It’s also been suggested that the government will take an equity stake in the companies and demand seats on their boards. That would almost certainly restrict the ability of the automakers to shut plants and lay off workers.

For all practical purposes, these moves would nationalize the auto industry and make its return to profitable, independent operation even more of a long shot. Presumably, an automotive “czar” could manage all of this meddling.

If that’s the case, Detroit’s automakers might want to rethink whether it’s safer for them to be in the bankruptcy courts than beneath the oppressive wing of a federal overseer.

Foreign-owned manufacturers who build cars with American workers pay wages similar to GM’s. But their expenses for benefits are a fraction of GM’s. GM is contractually required to support thousands of workers in the UAW’s “Jobs Bank” program, which guarantees nearly full wages and benefits for workers who lose their jobs due to automation or plant closure. It supports more retirees than current workers. It owns or leases enormous amounts of property for facilities it’s not using and probably will never use again, and is obliged to support revenue bonds for municipalities that issued them to build these facilities. It has other contractual obligations such as health coverage for union retirees. All of these commitments drain its cash every month. Moreover, GM supports myriad suppliers and supports a huge infrastructure of firms and localities that depend on it. Many of them have contractual claims; they all have moral claims. They all want GM to be more or less what it is.

But GM can’t continue to be what it is. The beauty of the bankruptcy system is that it would give GM leverage to pursue cost-cutting more aggressively than would otherwise be possible. The longer that corrective action is delayed, the more traumatic the eventual restructuring will be.

Yes, there’s a perception issue involved in bailing out the “Wall Street fat cats” while refusing to help manufacturing industries and their blue-collar workers. That’s why it’s a bad idea for government to get involved in picking winners and losers in the first place. But the financial industry is special a special case, because of its critical role in making the entire economy function. The purpose of the rescue plan was not to bail out financial firms, but to unfreeze the credit markets, the lifeblood of the entire economy. Any proposed bailouts of other industries have to be held to a much higher standard

2 thoughts on “Bankruptcy is the Right Medicine for Automakers”