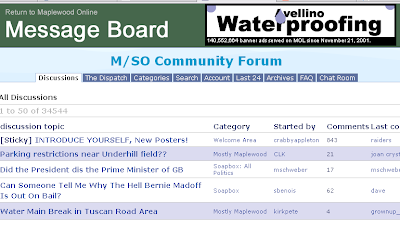 As the crisis unfolds, the Avellino Waterproofing ad
appears as a cruel joke… mocking me.

About 6:05 a.m., Eastern DAYLIGHT Time — The Web Goddess reports no water pressure at any upstairs faucet. “I hope we don’t have a burst pipe in the basement.” Yoicks!! This would have to happen on the very morning that clocks “spring forward,” depriving emergency responders of a potentially crucial hour of sleep.

6:07 a.m. — No water pressure at the downstairs faucets either. Visual reconnaissance confirms dry basement — an indication that the crisis may be systemic to the entire Tuscan Road microregion (the water could be out all up and down the street). Important tactical note: Each toilet can be flushed one time with water stored in the individual toilet tank.

6:15 a.m. — Time to see which news outlet in the Maplewood BlogolopolisTM is doing the best job of reporting the looming crisis. As long-time A.T.I.N. readers (i.e., since six days ago) are aware:

As a reminder, the websites, in approximate order of online presence:

6:25 a.m. — [Lightbulb] — I should sound the alarm!! The technology is in my hands!! But where to turn first? Here’s where more than a decade of brand development comes into play — I happen to know that Maplewood Online, Est. 1998, has a thriving complex of local message boards, and I have not seen anything comparable at the other sites. At 6:25 a.m., while others in the Maplewood BlogolopolisTM sleep soundly in their beds, I (me, Kirk Petersen!!) post the first emergency bulletin in a still-innocent world. At a mere 55 words, including the subject line, and if you count “a.m.” as a separate word, the message is a model of understated intensity and resolve:

New Jersey American Water confirms a water main break in the Tuscan Road area. Service is out at our house on Tuscan near Springfield. The company expects to restore service in 4 to 6 hours from the time of the initial report at 4:25 a.m. today, Sunday, 3/8/09.

6:30-6:40 a.m. — Finish sending emails to the other four players in the Maplewood BlogolopolisTM. That’s right, emails. This is the 21st Century, people!

6:59 a.m. — At last! After more than a quarter-hour of clicking the refresh button (no wonder Jamie gets so many page views at MOL!!), the first confirmatory report arrives. Well, sort of. A person styling herself as “Joan Crystal” posts the following:

Thanks for the alert. We have water at 6:59 AM this morning and we are one block from Tuscan Road.

Is she doubting me?? Or is the crisis more contained than originally feared? (Ugly thought: if there is a break between the water main and my house, am I liable for the repairs?)

7:02 a.m. — Visual reconnaissance out the front window reveals no sign of water bubbling out of the front yard. (But would I even be able to see it?)

Thanks – ours is out too. Had seen a truck and water gushing into the road around 6 last night, so suspected it was related.

Neither of my next-door neighbors are named “elsie,” so this provides the first welcome indication that the problem may be wide-spread. (In typical suburban busy-street microculture, I do not know the names of the folks across the street.) I ponder the bittersweet irony of my satisfaction at the knowledge that others are suffering, too.

7:32 a.m. — Two additional breathless outage reports have been filed, indicating at least four households are without water. With a humbling yet majestic sense of history, I note that all of the respondents have started their comments by thanking me. This touching response from a grateful public provides a rare opportunity for a vertical screen grab. I’m starting to think about a bagel run.

9:56 a.m. — Nearly three hours after the initial emergency report, citizen-journalist Joe Strupp reports the outage on his newsblog, The Maplewoodian, and links to this site. (Thanks, Joe!) I’m not sure the powder-blue text works, but I love the graphic. 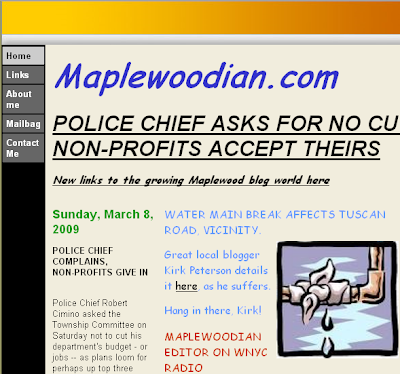 I met Joe the other night at the NY Times “The Local” launch party, and I remember thinking, this guy is toast — he’s up against the mighty New York Times, a Google zillionaire at Patch.com, and the online version of the venerable News-Record, which has been reporting from Maplewood for however many years it has been.

But just as Andrew Jackson said “one man with courage makes a majority,” Joe has proven that one man who checks his email on Sunday morning makes a news cycle.

10:15 a.m. — First photos from the disaster scene at Tuscan Road and Oberlin Street, where the tension was palpable. (I had to walk several blocks from my home, I might add.) 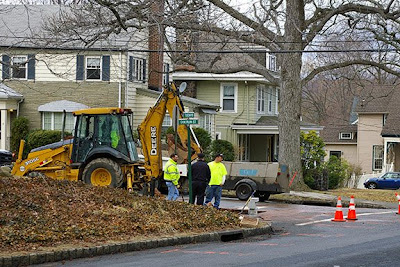 Photo below reveals a shiny red new plumbing thingy in a hole — first responders at the scene confirmed that the hole had been dug by the big yellow hole-making device pictured above. The hole undoubtedly will need to be filled before normal traffic can resume on Oberlin. Traffic on the much-busier Tuscan Road was thankfully not disrupted. 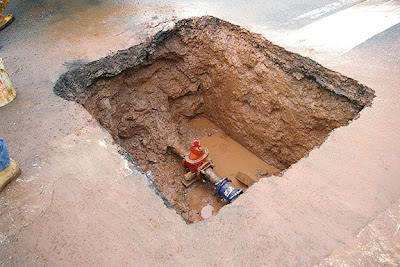 Service has been restored, according to one of Maplewood’s finest, who did not give his name. (Note to self: next time ask for name.) And here I thought New Jersey American Water was blowing smoke when they said 4 to 6 hours.

Wait… you mean I could be taking a shower right now?!?

Signing off from the Tuscan Road microregion of the Maplewood BlogolopolisTM, where it seems likely that some late-sleeping citizens will never know how narrowly they averted hygenic inconvenience.

11:30 a.m. — Quick update while my hair dries — Jamie Ross likes me! He included me in today’s edition of the Maplewood Dispatch! 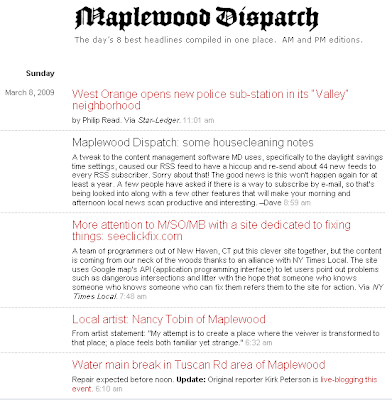 One thought on “Live-Blogging the Tuscan Road Water Main Break”