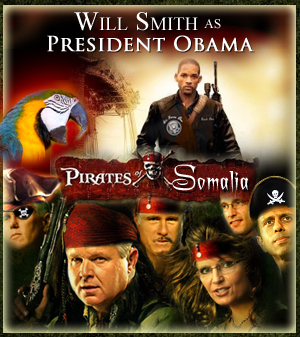 Parts of the right-o-sphere are all aflutter, debating whether President Obama deserves any credit for the rescue of a maritime hero held by pirates.

In The Corner, Jonah Goldberg piped up promptly and congratulated the President for authorizing the mission.Â  Later he took incoming fire from his right, as it turned out the President may not have specifically authorized the mission, he may just have refrained from interfering.Â  Jonah stood firm:

But you know what? Congratulations anyway. It’s good news the captain was rescued; Obama is the commander-in-chief and this happened on his watch; if he were thoroughly Carteresque he would have ordered that the pirates not be harmed, and you can be sure some of the snark-and-bilers would be blaming Obama if this ended badly (and I might have been one of them).

Look, I think my credentials as a critic of Obama are pretty solid. But I find the idea that I have to be critical no matter what Obama does to be exhaustingly unappealing.

Hear, hear.Â  But Rush Limbaugh weighed in on the side of snark-and-bile, saying sarcastically, “I would like to not only jump on the bandwagon of praising President Obama for a brilliant rescue, not only a plan but its execution, I don’t think the Navy had that much to do with it.”Â  He went on to fantasize at great length about who would play Obama in the movie, settling on Will Smith as both the President AND the Navy SEALs commander who took the crucial shot.Â  He later speculatedÂ  that if this had happened in the previous administration, the headlines would have been along the lines of Bush Assassinates Three Black Teenagers.Â  Exhaustively unappealing, indeed.

Just before the inauguration, Limbaugh famously said “I hope Obama fails.”Â  He clarified:

But of course he knew what the sound bite would be.Â  I often tell my liberal friends, don’t blame me for Rush Limbaugh and I won’t blame you for Michael Moore.

Most conservative commentators I saw came down closer to Goldberg’s opinion.Â  Abe Greenwald at Commentary didn’t single out the President by name, but said:

Fantastic news all around. The U.S. did not dither with negotiations or treat this as a criminal matter. It acted unilaterally and with force to free a brave man.

National Review’s Andy McCarthy notes that conservatives might well have expected a different outcome, based on the President’s past rhetoric:

Obamaâ€™s posturing put the pieces in place for a disaster. When an American-flagged ship was besieged, the president might have been paralyzed by his solicitude for the Islamic world and his commitment against unilateral action. He might have subordinated the safety of Americans to the bridge-building he has dubiously claimed to be central to our security. As commander-in-chief, he could have handcuffed the Navy. But he didnâ€™t. Whatever his predilections, Obama unleashed John Wayne when thatâ€™s what was needed. For that we should be pleased and acknowledge a job well done.

Even Charles Johnson at Little Green Footballs offered unambiguous approval (some of his lizardoid commenters were predictably less gracious):

The US Navy did us proud today. And yes, I know weâ€™re supposed to detest and mock everything President Obama does, on pain of excommunication, but as Commander in Chief he deserves congratulations for handling this one just right.

I cast my vote in the comments of my previous post on the topic — ” I donâ€™t think he did anything heroic, but I think he handled it fine.”Â  I’ll stand by that, although I might phrase it a little more graciously.Â  It wasn’t on the scale of the Cuban Missile Crisis, but the Commander in Chief did well in his first live-action military test.

It’s not over, of course.Â  Somali pirates hijacked more ships today — it’s a business model that works for them.Â  It will be interesting to see if they try to grab any more American ships.