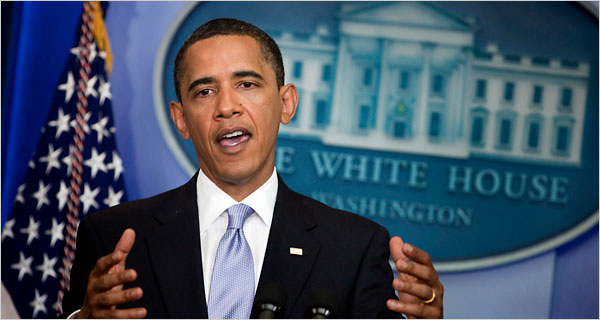 While much of Barack Obama’s national security policy has, thankfully, looked like a continuation of the Bush administration, his rhetorical response to the crisis in Iran thus far contrasts sharply with what we would have expected from his predecessor.

Bush turned the heat up under Iran by naming the regime to his “Axis of Evil.”Â  Obama, who painted himself as the anti-Bush during the campaign by pledging to negotiate with Iran “without preconditions,” initially responded to globally televised evidence of the regime’sÂ  evil by voicing “deep concern” while maintaining neutrality between the regime and the demonstrators.

It took several days for him to express support for the demonstrators, and only yesterday did he forthrightly denounce the regime’s crackdown, using the words “appalled,” “outraged,” “condemn” and “deplore.”Â  Well put.Â  (I was rooting for “evil,” the word behind this blog’s name, but I guess that’s too much to expect.)

the president and his aides made it clear that the extraordinary events in Iran have not caused the administration to rethink its desire to engage with the Iranian government in order to achieve a deal that would resolve international concerns over Iran’s nuclear ambitions.

Which leads us to a troubling similarity between Bush and Obama — an apparent penchant for clinging to a policy long after overwhelming evidence shows the folly of that policy.

In Bush’s case, the folly I’m talking about is not the decision to overthrow Saddam Husein.Â  Like roughly a third of all Americans, I continue to believe Bush was right to go to war in Iraq.Â  Rather, I’m talking about Bush’s stubbornly prolonged support for Donald Rumsfeld’s “light footprint” approach, in which we sent enough troops to depose Saddam but not enough to pacify the country.Â  The uncontrolled looting in the spring of 2003 made the shortfall clear, but it took until the 2006 election for Bush to replace Rumsfeld, and months more to launch the “surge” that now seems to have been decisive.

I just hope it doesn’t take Obama three years to understand the perils of engagement with the Iranian regime.

One thought on “The Perilous Implications of Bush’s Third Term”