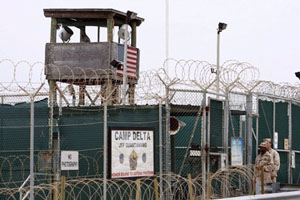 It’s been evident for some time that January 23, 2010, will arrive without the fulfillment of President Obama’s first executive order, to close the Guantanamo detention center within one year of the (January 22, 2009) signing.Â  This week brings further reminders of why breaking that pledge will be the better part of valor.Â  Many of the Gitmo detainees are Very Bad People, and there’s no good option for relocating them.

FDD Update, the indispensable newsletter of the indispensable Foundation for Defense of Democracies, each week offers a breadcrumb trail to the best writing on the misnamed Global War on Terror.Â  This week, FDD President Cliff May points to these Gitmo highlights:

In the ruling Joscelyn describes, a judge applied a “beyond-a-reasonable-doubt” standard in finding that Khaled al Mutairi could not be held as an enemy combatant.Â  Unfortunately, it was not a jury trial — because a jury might well have found that the government proved its case beyond a reasonable doubt.

Let us connect the dots on al Mutairi: (1) He left for Afghanistan shortly after September 11 without making any plans for a return trip; (2) He used a known al Qaeda/al Wafa smuggling route to get into Afghanistan; (3) He carried $15,000 in cash with him and admittedly gave at least some of this money to al Wafa–which, again, is a known al Qaeda front–to an al Wafa representative in Kabul; (4) He spent well more than a month in the Talibanâ€™s Afghanistan and could not offer any valid explanation for what he was doing during that time; (5) He fled towards the Tora Bora Mountains in a manner that is entirely consistent with al Qaeda and Taliban members, according to the court; (6) His â€œnon-possessionâ€ of his passport is consistent with â€œal Qaedaâ€™s standard operating proceduresâ€; (7) His contact information appeared on multiple rosters of â€œcaptured fighters,â€ including one that was kept by a senior al Qaeda terrorist; (8) His passport information appeared on multiple â€œpassport listsâ€ maintained by al Qaeda; and (9) Kuwaiti security claims that al Mutairi was a â€œhardcore extremistâ€ affiliated with al Qaeda before he ever went to Afghanistan in the first place.

Now, if you think that the above indicates that al Mutairi â€œmore likely than not became part of Taliban and al Qaeda forces in Afghanistanâ€ (a phrase used by Judge Kollar-Kotelly in a previous habeas ruling), then you share the opinion held by the U.S. military and intelligence officials who detained him.

But the judge did not see it that way.

The Miami Herald reported that al Mutairi will not immediately be released, but rather will be placed in “a Kuwaiti rehabilitation center at the emirate designed to help men jailed for years as jihadists reenter society in the oil-rich emirate.”Â  Good luck with that — al Shihri went through a similar program in Saudi Arabia.

At least al Mutairi will be released on the other side of the world from America, because Kuwait was willing to repatriate him.Â  But think about this: most Gitmo detainees will have to be held within the United States if Gitmo is closed, because other countries want nothing to do with them.Â  In a post-Gitmo era, enemy combatants released by misguided judges will have to be released on our own soil if their homelands will not take them.