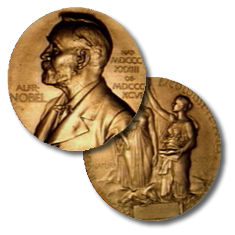 What to make of the bizarre awarding of the Nobel Peace Prize to a president who had completed 0.82% of his term at the time the nominations were due?

Or, as Claudia Rosette frames the question, “What Price for Obama’s Nobel Prize?“Â  Her conclusion:

America, in the course of defending its own freedoms, has longÂ extended to the likes of Norway, Denmark and Sweden aÂ protective umbrella. Under that shelter,Â too many EuropolsÂ have come toÂ believe thatÂ peaceÂ isÂ a function of nothing more than talk and hope and dreams and â€¦ prematureÂ prizes.

Obama said on Friday morning that he will accept this award as â€œa call to action.â€ Action on whose behalf? The five Norwegians who make up the Nobel peace prize committee chose to give him this award, for their own purposes. Obama, and America, owe them nothing. The real hope is thatÂ Obama will remember he took an oath (twice) not to serve as global spokesman for theÂ NorwegianÂ Nobel Committee, butÂ â€œto preserve, protect and defend the Constitution of theÂ United States.â€Â Before his presidency is over, keeping faith with that oath may require him to do things [that] would knock the stuffing out of theÂ featherbed philosophy of this sanctimonious crowd of Scandinavian free-riders.

To pick a completely unhypothetical example, it may require him to send tens of thousands of additional troops to Afghanistan.Â  At first blush, the Nobel Prize may seem to make it harder for an Obama administration to do anything involving a projection of American military power.

But there’s another way of looking at it.Â  While the prize is ridiculous, it’s not Obama’s fault that it was awarded.Â  At the risk of indulging in wishful thinking, the prize may give him protective cover to act in the long-term interests of peace — even when it involves military action in the short run.Â  If so, it would be part of the silver lining I’ve been monitoring since Election Day.