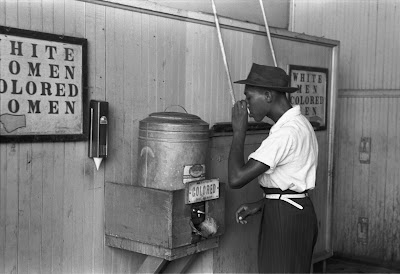 Differences on policy issues should not, on this day, obscure the marvel that has occurred. A man who in his early childhood could not use certain public restrooms has just been elected to the most powerful office in the world.

The 109-year-old daughter of a slave lived long enough to help elect a black president.

There will always be toxic individuals, but it’s now permissible to hope that we may have seen “The End of Racism” as a potent force in our society.

I’ve read a lot of conservative commentary in the past few hours, some of it cranky and bitter, more of it gracious and respectful. Here’s an excerpt from my favorite, from Mike Potemra in The Corner:

I voted for John McCain because I admire him immensely as a person, and agree with him on many more issues than I do with Senator Obama. And I ask a rhetorical question: Can we McCain voters, without embarrassment, shed a tear of patriotic joy about the historic significance of what just happened? And I offer a short, rhetorical answer.

As Peggy Noonan said earlier, “this means a great deal.”

It also means a great deal that America’s first black President is not a grievance monger like Jesse Jackson or a race-baiting thug like Al Sharpton. Obama is an archetypal family man who exudes a sense of calm leadership and stresses personal responsibility, and who built a winning coalition by earning the support of millions of people of all races. Jackson, who as recently as 2006 was named America’s “most important black leader,” will never wear that mantle again, and America will be the better for it.

I’ll close this tour of silver linings by returning to the theme of the first post I wrote about Obama: I Prefer the Chicago Politician to the Obamessiah. Obama is an extraordinarily charismatic and talented politician. To quote The Corner again:

The manner of this political victory is important, as well. This was not some prize bestowed upon him, and Barack Obama didnâ€™t just buy a winning lottery ticket; he out-smarted and out-worked both Hillary Clinton and John McCain. It is healthy that the American political system gathers the energies and talents of those who feel excluded into the nation to change it, rather than pushing them away from the nation to oppose it.

“Politics” is often considered a dirty word, but politics is the craft of government, and America has elected a master craftsman. He is a man comfortable in his own skin. Even while taking full electoral advantage of the cult-like following he inspired, he remained self-aware enough to jokingly deny rumors that he was “born in a manger.”

Although I’ve written at length about his occasional appalling choices in associates, to me that always seemed much more of a blot on his judgment than on his own moral character. No person is without flaws, and no successful politician can always take the high road. But I believe President-Elect Obama — like the man he defeated — is fundamentally a good and decent human being with the capacity to be an inspirational leader. The fact that our political system gave us a choice of two such candidates may be the greatest silver lining of all.