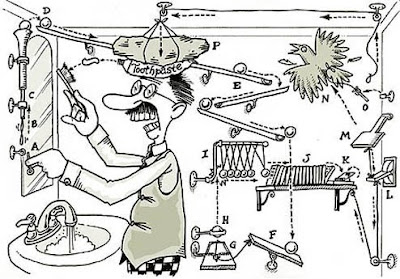 In today’s Wall Street Journal, Holman Jenkins identifies the key culprit in the current economic woes. It’s not Hank Paulson or Hank Greenberg or Stan O’Neal or even George Bush. The most formidable enemy of the American economy is Rube Goldberg.

Jenkins starts by discussing the complex set of rules that have enabled autoworkers to win the contracts that have crippled the American auto industry:

… the single biggest factor in preserving the UAW’s monopolistic power has not been labor law but Congress’s fuel-economy rules. These effectively have required the Big Three to lose tens of billions making small cars at a loss in UAW factories. Not only were the companies obliged to forgo profits they might have earned importing such cars, but CAFE deprived them of crucial leverage to control labor costs by threatening to move jobs to a factory in Spain or Taiwan or Poland.

The CAFE standards — a Rube Goldberg system known formally as Corporate Average Fuel Economy standards — distort the automobile marketplace while dismally failing at their fundamental reason for existence, which is to reduce carbon emissions. Jenkins then ties the proposed auto bailout to the financial meltdown and other issues (emphasis added):

A whole lot of Rube Goldbergism is coming home to roost, in the auto business, in the mortgage market, in the health-care market, in farm policy. We need to simple-down. The economy has a giant adjustment ahead, paying off debts, going from a heavy absorber of foreign capital and goods to a rebalanced relationship with the world.

The good news is that we have a natively resilient, flexible economy capable of making these adjustments — unless bound up in Rube Goldbergian mandates. Barack Obama, bless his heart, may or may not be ready for what’s coming his way. Yet his objectives are perfectly amenable to the simple-down approach.

He asked on Monday for Detroit to deliver a “plan” somehow to reconcile, at long last, the fantasy life of Washington, with nobody losing a job, with super energy-efficient cars, and yet somehow all this being done at a profit to Detroit.

Here’s a plan, but it requires Mr. Obama to play a role too, finally relinquishing such chronic free-lunchism where autos are concerned. He should simply get rid of the CAFE rules and impose a gasoline tax to move the country to a “new energy economy,” if he really believes in panicky climate predictions and/or that “energy independence” would be a net improver of American welfare. And be prepared for Detroit to shift jobs offshore if the UAW won’t concede competitive labor agreements.

Economist Greg Mankiw has been a champion of a gasoline tax for years, periodically welcoming new members in the Pigou Club, a collection of economists and pundits who favor Pigouvian taxes, which Wikipedia describes as “a tax levied to correct the negative externalities of a market activity.” Mankiw does a thorough job of advocating for a gas tax in his Pigou Club Manifesto. Here’s my shorthand version: Raising the gas tax substantially would automagically lead to more fuel-efficient cars, and the tax revenues raised could be used for good purposes such as reducing other taxes and remediating carbon emissions.

Having already established my credentials to offer “improvements” to Mankiw’s ideas, I want to point out that his specific proposal, which seemed bold when he unveiled it two years ago, now looks quaint:

I would like to see Congress increase the gas tax by $1 per gallon, phased in gradually by 10 cents per year over the next decade.

After watching gas prices go from $2 to $4 and back to $2 in a matter of months, it now seems clear that a series of annual 10-cent increases would go virtually unnoticed, thereby reducing the desired effect. But that’s a quibble — maybe it should be 50 cents annually for four years, or whatever.

Today’s WSJ also has a tantalizing hint that Mr. Obama might be amenable to taking on Rube Goldberg:

As part of his plan to kill government programs “that have outlived their usefulness,” the President-elect singled out farm subsidies for the rich. If he really means it, this would be big news.

Indeed it would — especially if it were a first step toward eliminating the Goldbergian farm subsidies altogether, along with the negative externalities they entail.