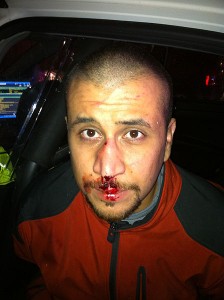 1.Â  Did the prosecution prove, beyond a reasonable doubt, that George Zimmerman was not acting in self-defense when he pulled the trigger?

This actually was the only question the jury needed to decide.Â  If the answer is no, then racial profiling, Florida’s stand-your-ground law and all the rest are irrelevant.Â  As law professor and legal Ã¼ber-blogger Eugene Volokh writes, “once the defense introduces any evidence of possible self-defense, the prosecution must disprove self-defense beyond a reasonable doubt.” If the jury concludes that the prosecution has failed to meet this test — and given Zimmerman’s injuries and the testimony that Trayvon Martin was on top,Â  they could not honorably have reached any other conclusion — then murder and manslaughter are both off the table.

2.Â  So was Zimmerman blameless in Martin’s death?Â

Gracious, no.Â  He disregarded the dispatcher’s (regrettably understated) instruction not to follow Martin, and he sure as hell should never have gotten out of his car.Â  If Zimmerman had not been playing wannabe cop, Trayvon Martin would be alive today.Â  But as William Saletan said in a thoughtful and well-researched Slate article, Zimmerman’s actions “make him a reckless fool instead of a murderer.”

3.Â  If Zimmerman was at fault, shouldn’t he be punished?

In our legal system, a defendant can be convicted only of the specific charges leveled against him or her.Â  Zimmerman was charged, ludicrously, with second-degree murder, and manslaughter is a lesser included charge.Â  I wonder if Zimmerman could have been charged with reckless endangerment, or impersonating a police officer, or some such.Â  If self-defense gets Zimmerman acquitted for pulling the trigger, maybe he could have been convicted of a much-lesser crime for his actions before pulling the trigger.

Unfortunately, that’s the way to bet, given that race-obsessed Attorney General Eric Holder runs a thoroughly politicized Justice Department.Â  The evidence supporting self-defense will be just as strong the second time around, but there’s no telling what a jury might do.Â  But Zimmerman can take some hope from a CNN article about Holder’s statements in the aftermath of the shooting last year:

5.Â  How has President Obama behaved in this saga?

Once again, as in the arrest of Professor Gates, Obama irresponsibly inserted himself into a racially charged local legal issue.Â  His statement that “If I had a son, he’d look like Trayvon” could have had the effect of tainting the jury pool and making it harder for Zimmerman to get a fair trial.Â  To the credit of the jurors, they withstood all of the pressures, acknowledged the reasonable doubt and reached the verdict demanded by that doubt.Â  To Obama’s credit, his statement after the acquittal was better: “We are a nation of laws, and a jury has spoken.”