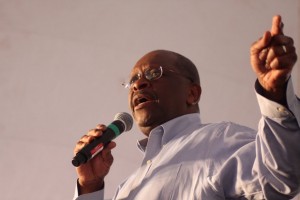 Among the many things I’m thankful for on this Thanksgiving Day, I’m grateful for the 1 percent.

No, not the targets of misguided OWS derision — I’mÂ  talking about the 1 percent of Americans who wear the uniforms of the United States Armed Forces.

In particular, I’m thankful for one newly-promoted (yesterday!) Petty Officer Second Class, Harry Kirk Petersen, second from the right.Â  (I’d be thankful for a better picture from the ranking ceremony, too — I ‘shopped it as well as I could, but I suspect it’s a cell-phone-from-the-balcony shot, and it’s downloaded from Facebook.)

Harry is now officially known as ABE2 Petersen (AW/SW).Â  Unpacking that leads to Aviation Boatswain’s Mate (Equipment) Second Class (Air Warfare/Surface Warfare).Â  Proud though I am of my son, there is a tiny part of me that wishes he were in the Army — then I could just call him “Sarge”.Â  As a Third Class Petty Officer before yesterday, he was the equivalent of a Corporal.

“Boatswain’s Mate“, a generalist designation for a deck sailor, is one of the oldest ratings in the United States Navy, dating from the Revolutionary War.Â  “Aviation Boatswain’s Mate” is a more recent and more specialized field, designating the people who launch and recover planes on an aircraft carrier.Â  To make things even more confusing, Aviation Boatswain’s Mates are subcategorized as (Equipment), (Handling) or (Fuels).Â  (AW/SW) means he has qualifications related to both air warfare and surface warfare.

ABEs like Harry are responsible for maintaining and operating the catapults, arresting gear, and other highly sophisticated equipment used to launch and recover planes.Â  The pilots themselves are officers, but they take direction from Aviation Boatswain’s Mates when preparing for takeoff.Â  ABEs wear green shirts on deck (ABHs wear yellow, ABFs purple). 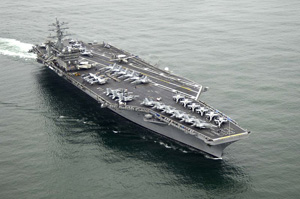 Harry is assigned to the “waist cat” crew of the U.S.S. Nimitz, the lead ship of the Nimitz-class carriers, which include 10 of the 11 active aircraft carriers in the American fleet.Â  The waist catapult (as opposed to the bow catapult) launches planes diagonally off of the port side of the ship.

The Nimitz is a multi-billion-dollar, nuclear-powered floating city of 5,000, with its own zip code (96620) and five dentists onboard when under way.

It was commissioned in 1975, 13 years before Harry was born, and currently is in dry dock in Bremerton, Washington, across the Puget Sound from Seattle. Â  Harry has been deployed twice on six-month “cruises” to the Indian Ocean in support of the war in Afghanistan, once on the Nimitz and once on temporary deployment with the U.S.S. Ronald Reagan.Â  On the Reagan he participated in relief efforts after the tsunami devastated Japan.

He’s in one of the hardest-working ratings in the Navy — while under way, he routinely works 14-hour days or more.Â  Life on shore is less frenetic.Â  The Nimitz will get under way again for testing purposes early next year.

Harry delights in telling family and friends that he has the most dangerous job in the Navy, other than Navy SEALs.Â  But while a suicide bomber killed 17 American sailors on the U.S.S. Cole when it was moored in a Yemeni port in 2000, at least the jihadis don’t have a navy or air force, and carriers are surrounded and protected by other ships while at sea.Â  I’m proud of him for serving, and as a parent I’m grateful that he’s not carrying a rifle in Kandahar.Â Â  The riflemen and their families are also in my prayers, today and every day. 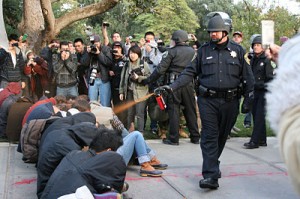 Of all the punditry about Rick Perry’s “oops” moment at the Republican debate this week, the best description about why it was more than just an embarrassing brain freeze came from Matt Bai in the New York Times: 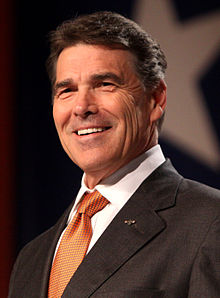 Here he was calling for what would be a truly radical restructuring of the federal government â€” involving many thousands of jobs and many billions of dollars in federal expenditures â€” and he didnâ€™t have a grasp on which sprawling departments he would shutter. It seemed the idea was not his own, but rather something he had tried and failed to memorize. …

Thereâ€™s nothing more central to Mr. Perryâ€™s campaign than the idea of scaling back the government in Washington â€” thatâ€™s pretty much the whole tamale right there â€” and what he proved last night, in 60 or so agonizing seconds, is that he hasnâ€™t thought deeply enough about it to even master the basics of his own agenda. …

It underlies the lingering sense that Mr. Perry is running chiefly because he saw an opening he could exploit, rather than having spent much time thinking about what ails the country and what to do about it.

Perry was the last major candidate to join the race, jumping in a mere three months ago when the Republican Party seemed to want to unite behind someone more conservative than Mitt Romney. (Personally. I’m relieved that it looks like the moderate Romney will be the nominee.)

On paper, the idea of a Perry candidacy was compelling — long-time governor of our second largest state, etc.Â  But on paper, Gov. Sarah Palin with her executive experience was more qualified for the presidency in 2008 than was Barack Obama, and we know how that turned out.

I don’t think it’s possible to become president without spending many years steering toward that goal.Â  Even before the sexual harassment allegations began erupting, it was clear that Herman Cain had given very little thought to many of the issues that he would face as president (such as, you know, foreign policy and stuff).Â  The narrowness of his focus would doom his candidacy if he wins the nomination.