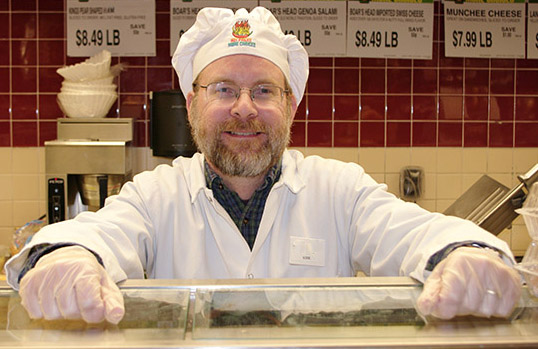 (Welcome, Maplewood Patch readers, and thanks to Mary Mann for the kind words.)

A summer evening in 1995: My boss’s boss, a Merrill Lynch executive who has never called me at home, calls me at home.Â  His opening line still ranks in my mind as one of the most interesting possible ways to start a business conversation:Â  “Kirk, do you have a passport?”

It turns out I do.Â  “OK, pack a bag, you’re getting on the Concorde to London in the morning.Â  We’re buying a British firm, and you’re going to write the script for the press conference.”

A September morning in 2009: The manager of the local supermarket flips through my application, which discloses work experience and a salary history he’s not used to seeing.Â  Plus there’s the whole Princeton thing.

He says, “all I have to offer is a job in the deli. Are you sure about this?”

It’s an excellent question, and the answer isn’t obvious, even to me.Â  But I manage to convince both of us. 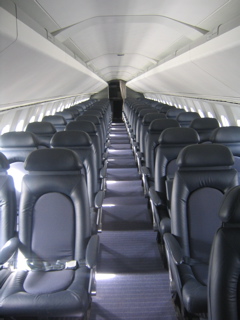 The Concorde was surprisingly cramped inside. The main thing that distinguished the experience from a puddle-jumping commuter plane was the digital display at the front of the cabin, which indicated we topped out at Mach 2 (over 1,300 mph) and 60,000 feet.

I had been told to pack for three days, but I ended up staying for 10.Â  Those were flush times on Wall Street, and Merrill’s executives and support Gumbys alike were all housed at The Dorchester, widely considered one of the world’s finest hotels.Â  (I suppose it is — they certainly kept up with my laundry needs.)

The target company was called Smith New Court.Â  Late one night, at a crucial juncture of the negotiations, it became necessary to briefly evict the Smith New Court personnel from the giant Dorchester suite where the talks were being held, so the Merrill team could confer by speaker phone with other executives in New York.Â  The Smithies needed a place to cool their heels, and the hotel’s business center was closed.

I was in my single room down the hall, casually dressed and thinking about bed, when there came a knock at my door.Â  Suddenly a wave of bespoke-suited Brits came flooding into the room, including the top two executives of Smith New Court, herded by a junior member of the Merrill team.

Padding around in my bare feet, I served sodas and spring water from the minibar and tried to make everyone at home.Â  Nervous laughter and small talk ensued for half an hour or so.Â  Then the negotiations resumed, and a billion-dollar deal was struck.

There were more trips to London that summer, and over the next dozen years, various employers and clients sent me to Tokyo, Cologne, Shanghai and Cleveland.Â  (I was able to squeeze in an Indians game — Jacobs Field is as nice as they say it is.)

I was the speechwriter for a CEO, I edited internal websites for two huge companies, I prepped executives for Congressional testimony, I helped clients spin bankruptcies, regulatory issues and involuntary CEO transitions.Â  I developed a taste for custom shirts, car service and single-malt whiskey.

For a job that pays $10 an hour, the deli counter gig wasn’t bad.Â  Probably the worst part was having to stand on my aging feet throughout a six-hour shift, except for a 15-minute break.Â  That, and cleaning the goo off the cheese slicer at closing time.

I generally enjoyed waiting on customers, most of whom responded well to a cheerful smile.Â  I learned that even though customers usually want their roast beef “sliced thin,” you have to set the slicer thicker than for turkey.Â  I discovered that low-sodium ham isn’t bad, but low-fat cheese tastes like glue.Â  Management wanted us to up-sell, so I said “would you like some salad with that?” and flattered myself that I was honing my marketing skills.Â  At one time or another, at least three fellow employees asked some variation of “how old are you, anyway?”

I had started my own consulting business in 2007, and I did pretty well for a while.Â  Then I did OK for a while.Â  Then the economy imploded, and after having virtually no income for a year, it had become clear that my entrepreneurial experiment was, at the very least, ill-timed.

I applied for dozens of full-time communications jobs while I was trying to drum up clients, and it was hard to decide which was more depressing — forcing myself to network with people who weren’t going to do business with me, or crafting thoughtful cover letters to hiring managers who weren’t going to interview me.Â  The guilty knowledge that I “should be doing more” repeatedly collided with the paralyzing reality that nothing in particular had to be done today.

At 51 (which is not old, dammit!), I’ve learned some hard things about the job market.Â  It turns out that if the job description calls for “8-10 years of experience” in a role, that’s not really a minimum — it’s more like a maximum.

It turns out that “overqualified” is code for “too old.”Â  (I’ve promised myself that the next time a potential employer tells me I’m overqualified, I’m going to offer to work below my full capacity.)

I kind of dared myself into applying for the supermarket job.Â  While commiserating with another idle consultant about the work we did back in the day, I heard myself saying, “at this point, I can’t imagine turning down any job at any salary.”

The instant I said it, I started wondering whether I really meant it.Â  When I saw the words “Now hiring!” on my supermarket receipt, it was time to put up or shut up.

The supermarket manager, naturally, said I was overqualified.Â  If the line had come to me in time, I would have said “I’ve never worked retail before — maybe I’m underqualified.”Â  The manager looked to be about my age, maybe he felt some kinship.Â  For whatever reason, he gave me a shot. 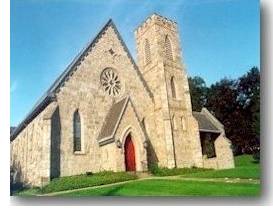 As it turned out, I was only there three months.Â  My new gig is a step up in both status and pay.Â  On January 4 I became the parish administrator of Grace Episcopal Church in Madison, NJ.Â  I’m now responsible for producing four weekly service bulletins and running the busy office at one of the largest Episcopal churches in North Jersey.

I got the position the old-fashioned way — through family connections.Â  Up until a few months ago, it had been the Web Goddess’s job for five years.

My beloved left Grace Church after she parlayed her years of self-taught website work and her knowledge of all things Episcopal into a newly created job, as Director of Communications and Technology for the Episcopal Diocese of Newark, which includes 108 parishes in northern New Jersey.Â  She has quickly started raising the profile of the diocese by redesigning a weekly newsletter and leveraging social media, while supporting the bishop’s communications activities.Â  It’s her first professional venture into the arena where I’ve played for 30 years, and she’s a natural talent.

So, let’s review: My wife landed a job in my field when I couldn’t.Â  Now I have the admin job she held before her promotion.Â  How’s the ol’ ego holding up, Kirk?

Well, negotiations with my ego are continuing.Â  Ironically, each recent improvement in my income has brought fresh challenges for my self esteem.

For most of 2009 I was entirely supported by my wife’s income and savings.Â  By any objective measure, a part-time supermarket job was a step up from unemployment, and I made a conscious choice to take pride in my work.Â  But it took a while to get used to being spotted by friends in my white coat and funny hat.Â  The Web Goddess aptly called it a “survival job,” and I used that term as protective cover.

The full-time church job feels more like a career transition.Â  It also feels like an abandonment of the conceit that I’m a primary bread-winner who belongs in a globe-trotting world.Â  I’m not sure I would have been open to taking the job if I had not just spent three months slicing cheese and cleaning up.

It helps — a lot — that I like the people I’m working with, and I care about the organization.Â  For more than a decade the Web Goddess and I have found fulfillment and a powerful sense of community at our home parish of St. George’s Episcopal, and Grace is a similar environment in many ways.Â  I see and feel the spiritual nourishment that Grace provides to its parishioners, and I feel privileged to have an opportunity to help.

I don’t expect I’ll be there until retirement, but the priest who is now my boss asked, quite reasonably, for a one-year commitment, so I’m not looking for jobs in 2010.Â  (Part-time projects in my off hours are another matter… let me know if I can help your business or organization meet your communications needs.)

Long ago I learned that job satisfaction does not primarily depend on how much money you make, or the type of work you do, or the prestige of the organization you serve.Â  In 12 years at Merrill Lynch I played several different roles while my income steadily grew, and I went through cycles of being both energized and miserable.

No, the most important factor in job satisfaction is whether you get along with your immediate boss.Â  It’s still early days at Grace, but I’m liking my chances, working for a woman of the cloth.Â  (In the words of the prominent Episcopal theologian Robin Williams, “Male and female God created them; male and female we ordain them.”)

In addition to a paycheck, my new job provides support for my spiritual infrastructure.Â  It helps me focus on living one day at a time, and on being grateful for all the blessings in my life.

And I am richly blessed.Â  I’m safe, and healthy, and in love with my wife.Â  I’m a United States citizen, having won that lottery the day I was born. I have a fixed-rate mortgage, and positive equity in a comfortable house in a nice town.Â  Around the world, billions of people would trade places with me in a heartbeat.

The job gives me a reason to get out the door in the morning, and I look forward to arriving at the office.Â  I’m doing real work that needs to be done, and I stretch myself to meet deadlines. People are counting on me, and I get recognized when I do good work.

If things get hectic, across the hall from the office is a … sanctuary … where I can seek through prayer and meditation to improve my conscious contact with God.Â  Staff meetings end with the words “Go in peace to love and serve the Lord.”

I may never again make the kind of money I made a few short years ago, but I won’t have that kind of pressure, either.Â  Not that it’s a slow-paced job — there are more than 1,000 parishioners, four Sunday bulletins in two different liturgies, a Eucharist or prayer service every day of the year, multiple tenants in a large physical plant, an office that buzzes with activity.Â  The Web Goddess set a high standard of efficiency and excellence, and all the details seem overwhelming sometimes.

But it’s not the corporate world.Â  After letting a detail slip one day, I told the Rector I was used to an environment where I’d be crucified for a minor transgression like that.Â  She replied, “we think one crucifixion was enough — we focus more on redemption.”

32 thoughts on “Honest Labor: From Mach 2 to Muenster to Madison”