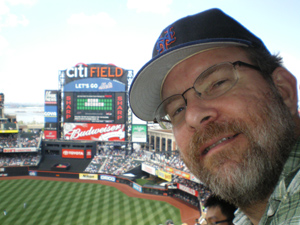 What a perfect way to spend a summer Sunday afternoon — sitting in the shade at Citi Field, a beautiful blonde by my side, watching my Mets shut out the Atlanta Braves.Â  Seven scoreless innings by Johan Santana, a rare 1-2-3 ninth from K-Rod, a thundering home run to straightaway center by Ike Davis, a gutsy two-out, pinch-hit single by catcher-of-the-future Josh Thole.

It was my first trip to Citi Field — money was a little tight last year, when the Mets first moved in.Â  It’s a beautiful ballpark, and despite my tendency toward nostalgia, I’m not going to miss Shea at all.

The promotional giveaway was Jason Bay bobble-head dolls — and the slumping Bay sat the game out.Â  On the way out of the stadium I heard someone say “Jason Bay bobble-heads, ten dollars.”Â  I thought he was selling as a joke, turns out he was buying for real.Â  The Web Goddess and I handed over our unopened boxes and collected a twenty-dollar bill.Â  I’m baffled by the transaction, but it covered our parking.Â  Barely.

Oil spill, Afghanistan, recession, whatever.Â  Those things will matter tomorrow.Â  For today, I’ve been to a ball game, my team won, and now I’m safe at home.

One thought on “First Memories of Citi Field”