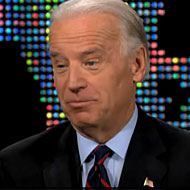 … progress in Iraq “could be one of the great achievements of this administration.”

By the time I became aware of this, the pile-on had already started.Â  I held off on commenting because it seemed like all the interesting rhetorical gambits had already been played.

Max Boot looked on the bright side:

Some might dismiss this as chutzpah from someone who, like Barack Obama, opposed the surge needed to stabilize the situation in Iraq. But, brazen or not, itâ€™s great to see the Obama administration taking ownership of Iraq and realizing that simply pulling out all our troops canâ€™t be the sole goal of our policy there.

Yes, except I don’t think an unscripted comment from Biden,Â  a walking gaffe machine, is necessarily a reflection of the administration’s thinking.

Over at The Corner, Peter Kirsanow had the cleverest humorous take:

[T]he administration’s achievement is no more astounding than Bull Connor’s passage of the 1964 Civil Rights Act, Kruschev’s reunification of Germany, or Jefferson Davis’s preservation of the Union.

But after thinking about it for several days, I started to realize that Biden was right.

Bear with me here, and think about the fact that after more than a year in office, the Obama administration has not screwed up what the Bush administration achieved in Iraq.Â  Of course, when you put it that way, it sounds kind of dismissive toward Obama.Â  But I assert that “not screwing up Iraq” is a non-trivial achievement — and certainly a much better outcome than many of us feared before the election.

Now compare that with the other achievements of Obama’s first year in office:

Well, he did successfully nationalize two of the Big Three automakers.Â Â  [Update: Not to mention porkulus!] Hm… what’s the opposite of an achievement?

All kidding aside, there is one arena where Obama has an opportunity for a genuinely great achievement: Afghanistan, where the administration is attempting to replicate the strategy that was so successful in Iraq.Â  From the New York Times:

For much of the past eight years, American and NATO forces have mounted other large military operations to clear towns and cities of Taliban insurgents. And then, almost invariably, they have cleared out, never leaving behind enough soldiers or police officers to hold the place on their own.

And so, almost always, the Taliban returned â€” and, after a time, so did the American and NATO troops, to clear the place all over again.

â€œMowing the grass,â€ the soldiers and Marines derisively call it.

This time, in Marja, the largest Taliban stronghold, American and Afghan commanders say they will do something they have never done before: bring in an Afghan government and police force behind them. American and British troops will stay on to support them. â€œWeâ€™ve got a government in a box, ready to roll in,â€ said Gen. Stanley A. McChrystal, the top American commander here.

There are no guarantees, of course — the Afghan “surge” may fail.Â  But if it does succeed — and as in Iraq, I define “success” in Afghanistan as a reasonably stable, reasonably self-sufficient, democratic government allied with the United States — then I’ll be happy to give Obama credit for that achievement.

4 thoughts on “Biden Was Right About Obama’s “Great Achievement””