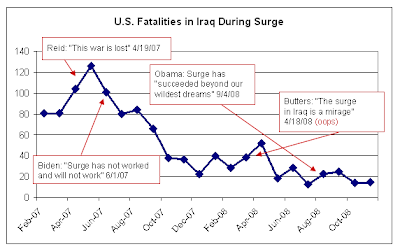 Like many (most?) bloggers, I crave a bigger audience, and I thought I had found a gambit that might tempt James Taranto to link to me from his “Best of the Web Today.” Yesterday’s BotWT included one of his “Wannabe Pundit” items, quoting a journalist taking a pot shot at the Bush Administration in the context of a non-political article. Here’s the quote, which was from an article about buying Oriental rugs:

“Hizballah has re-armed, Israel could attack Lebanon again at any time, Iran is probably building nuclear weapons, the surge in Iraq is a mirage, and America is falling apart,” reports Time magazine’s Andrew Lee Butters.That’s the bad news. The good news is, you now know how to buy an Oriental rug.

Wait a minute — “the surge in Iraq is a mirage”? In September, even Candidate Obama was forced to admit that the “surge has succeeded beyond our wildest dreams”! My outrage gets my creative juices flowing — I’ll do a chart!! I’ll show how U.S. casualties have declined over the duration of the surge, and I’ll add famous surge quotations!!! It’ll graphically illustrate what a nonsensical statement Butter made!!!! How could he even write such a thing, more than two months after Obama said the surge succeeded?

Well, he didn’t. I discovered this when I was putting the finishing touches on my chart. I just needed the original date of the Butters quote… oops. It was in BotWT yesterday, but apparently the normally careful Taranto didn’t notice that the quote on Time’s website was dated April 18, 2008.

Anyway, there’s the chart. (What, I’m not gonna post it after I go to all that trouble?)

Update — I sent the item to James Taranto anyway, and here is his response:

Sorry about that. I don’t normally use such old items, and indeed I didn’t notice how old it was. However, since I wasn’t making fun of him specifically for the surge quote, I didn’t make an actual error and thus will not run a correction. Feel free to note on your blog that I acknowledge your point, however.

Fair enough — even if the statement were accurate or defensible, it would still qualify as a Wannabe Pundit on the basis of irrelevance to the rest of the article.